425 downloads per month
Used in 4 crates

Another innovative feature of FunDSP is its signal flow system, which can determine analytic frequency responses for any linear network.

FunDSP comes with a combinator environment containing a suite of audio components, math and utility functions and procedural generation tools.

To discuss FunDSP and other topics, come hang out with us at the Rust Audio Discord.

Many common algorithms can be expressed in a natural form conducive to understanding. For example, an FM oscillator can be written simply as:

The above expression defines an audio graph that is compiled into a stack allocated, inlined form using the powerful generic abstractions built into Rust. Connectivity errors are detected during compilation, saving development time.

With no macros needed, the FunDSP graph notation integrates audio DSP tightly into the Rust programming language as a first-class citizen. Native Rust operator precedences work in harmony with the notation, minimizing the number of parentheses needed.

FunDSP graph expressions offer even more economy in being generic over channel arities, which are encoded at the type level. A mono network can be expressed as a stereo network simply by replacing its mono generators and filters with stereo ones, the graph notation remaining the same.

There are two parallel component systems: the static AudioNode and the dynamic AudioUnit.

Both systems operate on audio signals synchronously as an infinite stream.

AudioNodes can be stack allocated for the most part. At the moment, block processing via AudioNode::process requires heap allocation. Some nodes may also use the heap for audio buffers and the like.

The purpose of the AudioUnit system is to grant more flexibility in dynamic situations: decisions about input and output arities and contents can be deferred to runtime.

Processing samples is easy in both AudioNode and AudioUnit systems. The tick method is for processing single sample frames, while the process method processes whole blocks.

Of the signals flowing in graphs, some contain audio while others are controls of different kinds.

With control signals and parameters in general, we prefer to use natural units like Hz and seconds. It is useful to keep parameters independent of the sample rate, which we can then adjust as we like.

In addition to sample rate adjustments, natural units enable support for selective oversampling (the oversample component) in nested sections that are easy to configure and modify.

Some low-level components ignore the sample rate by design, such as the single sample delay tick.

The default sample rate is 44.1 kHz. In both systems, a component A can be reinitialized with a new sample rate: A.reset(Some(sample_rate)).

There are three name-level compatible versions of the prelude.

The default environment (fundsp::prelude) offers a generic interface. It is flexible and attempts to conform to Rust practices.

An application interfacing fundsp can mix and match preludes as needed. The aims of the environments are:

Thus, two identical networks sound identical separately but different when combined. This means that noise() | noise() is a stereo noise source, for example.

Custom operators are available for combining audio components inline. In order of precedence, from highest to lowest:

In the table, constant denotes an f32 or f64 value. Direct arithmetic with f32 and f64 values, however, broadcasts to an arbitrary number of channels.

The negation operator broadcasts also: -A is equivalent with (0.0 - A).

The thru (!) operator is syntactic sugar for chaining filters with similar connectivity.

Components can be broadly classified into generators, filters and sinks. Generators have only outputs, while filters have both inputs and outputs.

Sinks are components with no outputs. Direct arithmetic on a sink translates to a no-op. In the prelude, sink() returns a mono sink.

Bus is a commutative operator where components may appear in any order. The other operators are not commutative in general.

All four are fully associative, and each come with their own connectivity rules.

The pipe ( >> ) operator builds traditional processing chains akin to composition of functions. In A >> B, each output of A is piped to a matching input of B, so the output arity of A must match the input arity of B.

It is possible to pipe a sink to a generator. This is similar to stacking. Processing works as normal and the sink processes its inputs before the generator is run.

Where the arithmetic operators are reducing in nature, the branch ( ^ ) operator splits a signal into parallel branches.

Branching is useful for building banks of components such as filters.

The bus ( & ) operator can be thought of as an inline audio bus with a fixed set of input and output channels. It builds signal buses from components with identical connectivity.

In A & B, the same input is sent to both A and B, and their outputs are mixed together. Components in a bus may appear in any order.

The bus is especially useful because it does not alter connectivity: we can always bus together any set of matching components without touching the rest of the expression.

Both A + B and A & B are mixing operators. The difference between the two is that A + B is reducing: A and B have their own, disjoint inputs, which are combined at the output. In A & B, both components source from the same inputs, and the number of inputs must match.

The stack ( | ) operator builds composite components. It can be applied to any two components.

As a graph operator, the stack corresponds to the disjoint union. In A | B, the inputs and outputs of A and B are disjoint and they are processed independently, in parallel.

In stacks, components are written in channel order. In A | B | C, channels of A come first, followed by channels of B, then C.

The expression A >> (B ^ C ^ D) defines a signal processing graph. It has whatever inputs A has, and outputs everything from B and C and D in parallel.

The whole structure is packed, monomorphized and inlined with the constituent nodes consumed. If you want to reuse components, define them as functions or closures. See the preludes for examples.

Connectivity is checked during compilation. Mismatched connectivity will result in a compilation error complaining about mismatched typenum types. The arrays Frame<T, Size> that connect components come from the generic-array and numeric-array crates.

Graph combinators consume their arguments. This prevents cycles and imposes an overall tree shape on the resulting computation graph.

Implicit cycle prevention means that the built structures are always computationally efficient in the dataflow sense. All reuse of computed data takes place locally, inside combinators and components.

There are two main ways to structure the reuse of signals in FunDSP graph notation: branching and busing. Both are exposed as fundamental operators, guiding toward efficient structuring of computation. Dataflow concerns are thus explicated in the graph notation itself.

The graph notation can get cumbersome for complex graphs. Also, sometimes the number of inputs and outputs is not known until runtime.

The system can calculate the frequency response of any linear network analytically by composing transfer functions and folding constants. Linear networks are constructed from linear filters, delays, and the operations of:

Signal latencies are similarly analyzed from input to output in detail, facilitating automatic removal of pre-delay from effects chains.

However, with appropriate scaling a 3-point FIR can vanish, too:

Verified frequency responses are available for all linear filters.

Unlike linear filters, nonlinear filters may be sensitive to incoming signal level. Due to nonlinearity, we do not attempt to calculate frequency responses for these filters.

In this example we make a 12-band, double precision parametric equalizer using the peaking bell filter.

First, declare the processing pipeline. Here we space the bands at 1 kHz increments starting from 1 kHz, set Q values to 1.0 and set gains of all bands to 0 dB initially:

For plotting the frequency response, we can query the equalizer. Query equalizer gain at 1 kHz:

The Debug output of audio filters contains information about the node and an ASCII chart of the frequency response of channel 0.

Here is an example of using evcxr to examine frequency responses interactively:

These free functions are available in the environment.

The type parameters in the table refer to the hacker prelude.

envelope(f) is a node that samples a time varying control function f. For example, envelope(|t| exp(-t)) is an exponentially decaying envelope. A control function is something that is expected to change relatively slowly. Therefore, we can save time by not calling it at every sample.

The argument to the function is time in seconds. Whenever the node is reset, time resets to zero.

envelope is generic over channel arity: The return type of the function - scalar or tuple - determines the number of outputs.

The samples are spaced at an average of 2 ms apart, jittered by noise derived from pseudorandom phase. The values in between are linearly interpolated.

lfo (Low Frequency Oscillator) is another name for envelope.

branch, bus, pipe, sum and stack are opcodes that combine multiple nodes, according to their first generic argument. They accept a generator function that is issued i64 integers starting from 0. The nodes are stack allocated.

For example, to create 20 pseudorandom noise bands in 1 kHz...2 kHz:

Similarly, branchf, busf, pipef, sumf and stackf accept a generator function that is issued values evenly distributed in the unit interval 0...1. The first node is issued the value 0 and the last node the value 1. If there is only one node, then it receives the value 0.5.

These are arguments to the shape opcode.

Tagged single channel constants can be instantiated with tag(id, value), where id is i64 and the initial value value is f64.

The timer(id) opcode instantiates current time in seconds as a parameter that can be queried. It has no inputs or outputs; it can be added to any node by stacking.

The monitor(mode, id) opcode is a pass-through node that presents some aspect of data passed through as parameter id. Metering modes are:

The same modes are used in the meter opcode. 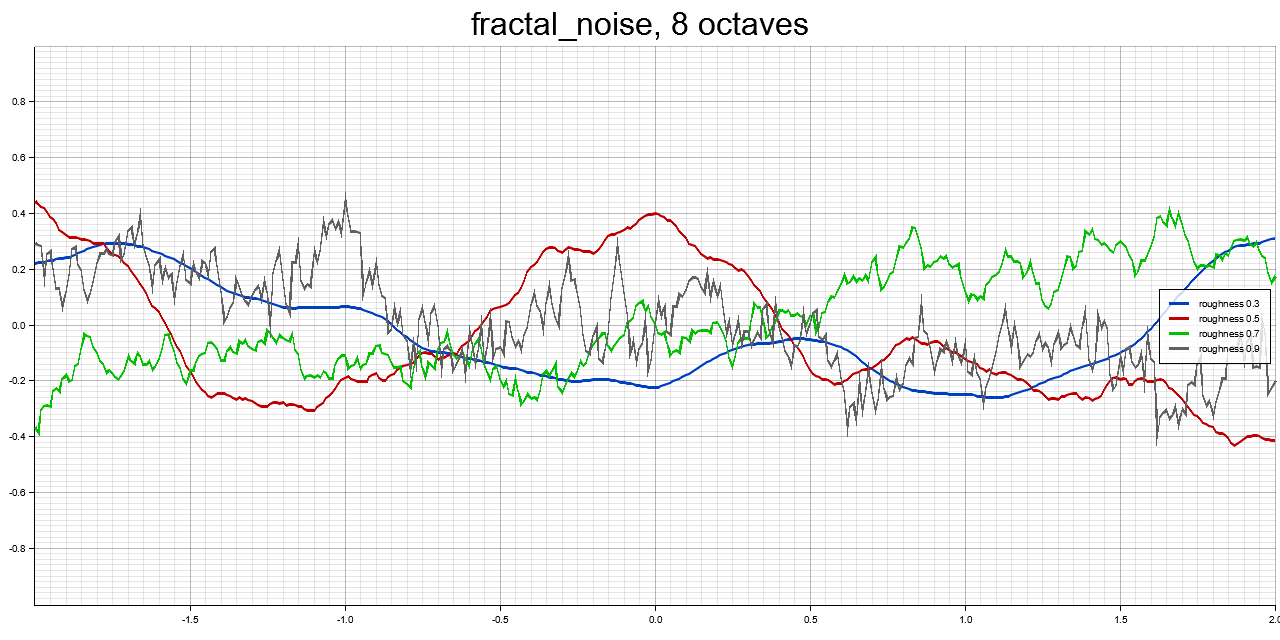 Some examples of graph expressions.

Examples From The Prelude

Many functions in the prelude itself are defined as graph expressions.

There are usually many ways to express a particular graph. The following expression pairs are identical.

The representation contains input and output arities, which are encoded as types U0, U1, ..., by the typenum crate. The associated types are AudioNode::Inputs and AudioNode::Outputs.

The representation contains sample and inner processing types when applicable, encoded in that order. These are chosen statically. The associated sample type, which is used to transport data between nodes, is AudioNode::Sample.

The preludes employ the wrapper type An<X: AudioNode> containing operator overloads and other trait implementations. The wrapper also implements either of AudioUnit32 or AudioUnit64 traits.

The type encoding is straightforward. As an example, in the hacker prelude

The compiler reports these types in an opaque form. An attached utility, examples/type.rs, can unscramble such opaque types. This invocation prints the above type:

It is also possible to declare the return type as an impl AudioNode. However, this type is also opaque and cannot be stored as an AudioNode; conversion to AudioUnit32 or AudioUnit64 may be necessary in this case.

Declaring the full arity in the signature does enable use of the node in further combinations. For example:

Unless you explicitly state otherwise, any contribution intentionally submitted for inclusion in FunDSP by you, as defined in the Apache-2.0 license, shall be dual licensed as above, without any additional terms or conditions.