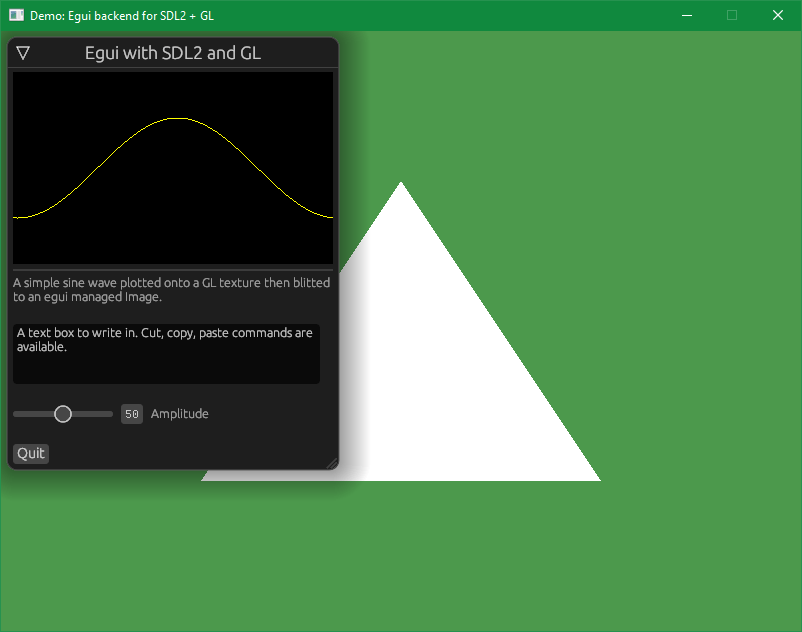 This is a backend implementation for Egui that can be used with SDL 2 for events, audio, input et al and OpenGL for rendering.

I've included an example in the examples folder to illustrate how the three can be used together. To run the example, do the following:

Starting with v13.1 SDL2 is 'bundled' as a cargo requirement and so SDL2 needn't be setup separately. If, however, you wish to be in control of the SDL2 setup, you can remove the bundled feature from the cargo.toml and set up the SDL2 framework separately, as described in the SDL2 repo above.

Why would anyone want to use this then, you wonder? Well I would say the familiarity of using SDL2, the elegance of Egui and the power of OpenGL makes for a good combination in making games, emulators, graphics tools and such.

As far as the implementation goes, I've used Emil's original egui_glium and egui_web backends (see the egui github for source) as guides to implement this version, but have deviated in a couple of ways:

I'm not an expert in Egui, Open GL or Rust for that matter. Please do submit an issue ticket (or better, send a PR!) if you spot something something that's out of whack in so far as the backend implementation goes. Issues regarding SDL2, Egui or OpenGL should be directed towards their respective repository owners!

Note: most of essential features are supported now.