877 downloads per month
Used in 2 crates (via racer) 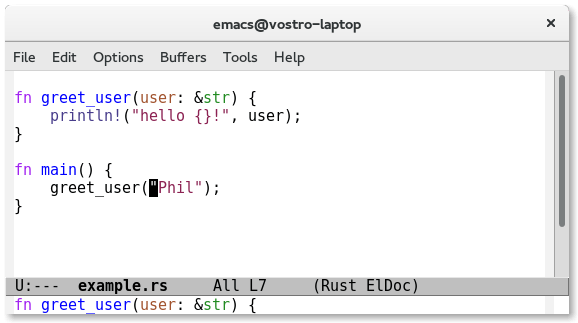 RACER = Rust Auto-Complete-er. A utility intended to provide Rust code completion for editors and IDEs. Maybe one day the 'er' bit will be exploring + refactoring or something.

If you're using rustup, run

Note: The second command adds the rustc-dev component to the nightly toolchain, which is necessary to compile Racer.

Internally, racer calls cargo as a CLI tool, so please make sure cargo is installed

As mentioned in the command output, don't forget to add the installation directory to your PATH.

To complete names in external crates, Racer needs Cargo.lock. So, when you add a dependency in your Cargo.toml, you have to run a build command such as cargo build or cargo test, to get completions.

Racer is used as a static library in RLS

Racer can be used with Eclipse through the use of RustDT. (User guide is linked in repo description)

Emacs integration has been moved to a separate project: emacs-racer.

Gedit integration can be found here.

The Kate community maintains a plugin. It is bundled with recent releases of Kate (tested with 16.08 - read more here).

The Sublime Text community maintains some packages that integrates Racer

Vim integration has been moved to a separate project: vim-racer.

Racer recommends the official Rust (rls) extension based on RLS, which uses Racer for completion.

You can find the racer package for Atom here

Kakoune comes with a builtin integration for racer auto completion.