Displays your currently playing song / album / artist from MPD in Discord using Rich Presence. It includes support for multiple MPD hosts if, like me, you have more than one server you alternate between.

The program does not require MPD or Discord to be running in order to run. 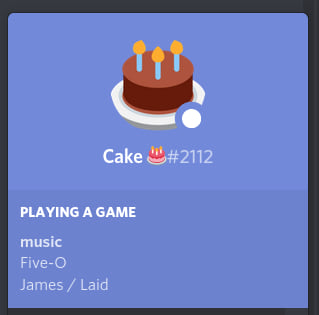 The cargo package can be found here.

The AUR package can be found here.

I have a derivation on the way. The [replace] tag is causing some issues right now.

Running the program once will generate a default configuration file. On Linux this will be at ~/.config/discord-rpc/config.toml

Any part of the format string that does not match one of these tokens will be displayed as is. The following will automatically be replaced with their value from MPD:

This configuration file is automatically generated if one does not exist. It is included here for reference.