haku is a simple command runner, kind of a make alternative but it is not a make replacement. It provides a limited set of internal commands(for, if, while etc) that allow anyone to write cross-platform task files. If it is not enough, haku has a Rust-like attributes for marking a block of a script to run, e.g., only on a specific platform.

Warning: platform specific properties are detected at compile time, not at run time. So, let's assume you build haku on Windows 32-bit, and run it on Linux 64-bit(e.g., using Wine). The application will keep executing scripts with flags: platform=windows and bit=32.

Commands are stored in files named:

When haku starts without task file name, first, it looks for Taskfile. If it does not exist, haku looks for Hakufile.

All commands are either free ones(those must be in the file beginning), or grouped by sections - a section is called a recipe. The file syntax is relaxed and simplified makefile one.

Internally haku uses powershell on Windows and sh on any other OS to execute an external command. You can override the default using shell built-in function. 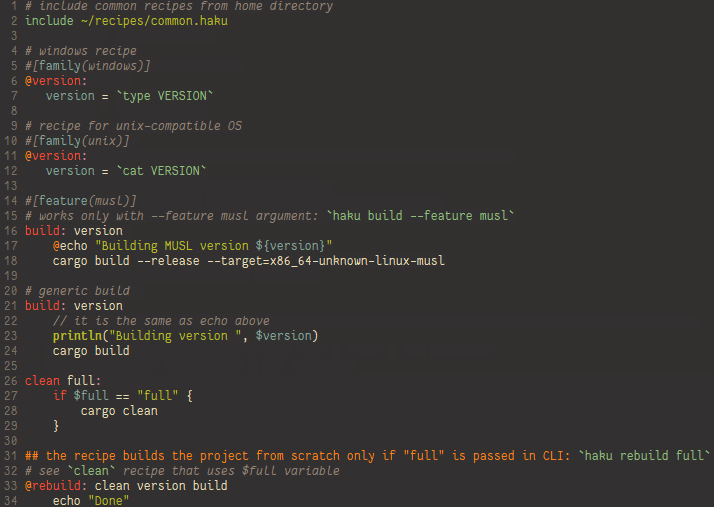 Haku is heavily inspired by two great projects: GNU make and just. They do their job well but some things still are a bit inconvenient to me. What made me to implement my own command runner:

At the same time, haku lacks some features that others have. See detailed comparison haku with just in docs. As for comparison with make, haku should not be used as build system because haku does not check timestamps and does not try to minimize build time. So, both tools are for different purposes and it does not make much sense to compare them.

You can compile the application from sources, or install using cargo:

You need Rust compiler that supports Rust 2018 edition (Rust 1.38 or newer) to do it. If you want to upgrade existing haku, execute the following command:

For Windows and Ubuntu you can download precompiled binaries from Release page.

For Vim and Neovim

The script above can be run without changes on any platform: