bita is a HTTP based file synchronization tool striving for low bandwidth usage through data reuse.

bita is a generic file synchronization tool but has been developed with software update of embedded/IoT systems in mind.

Software update is a typical case where bita may provide significant bandwidth reductions, where one can expect that a new software image will contain a lot of data already present on the system being updated. bita can identify the parts (chunks) already present on the system and fetch the missing ones from remote, still outputing an exact clone of the archived source file.

No need to pre-build patch files for going to/from different release versions. No need to run any special file server. Just bita compress the release image, upload the archive to any HTTP file hosting site. And bita clone the archive using whatever local data is available on the system. 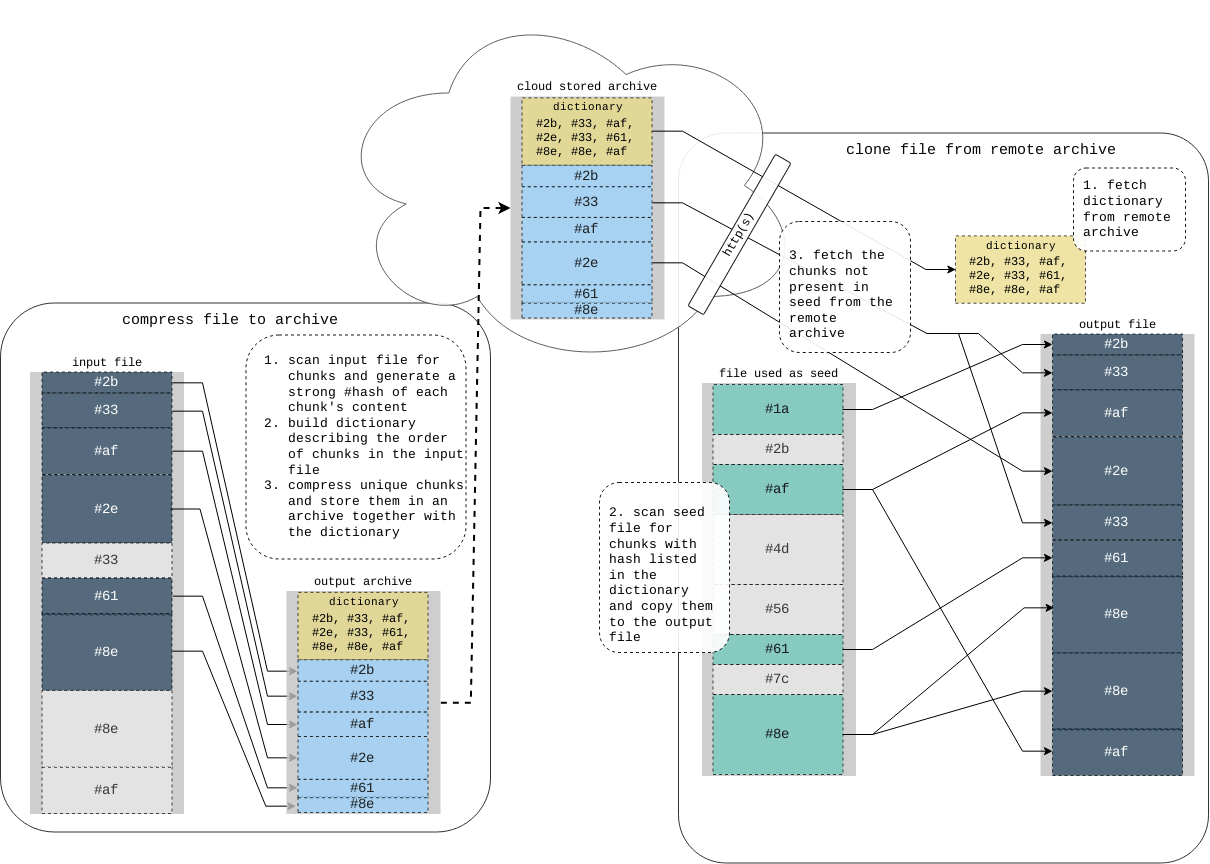 On compression the input file is scanned for chunk boundaries using a rolling hash. With the default setting a suitable boundary should be found every ~64 KiB. A chunk is defined as the data contained between two boundaries. For each chunk a strong hash is generated (using blake2). The chunk location (offset and size) in the input file and the strong hash is then stored in the dictionary. If chunk's strong hash has not been seen before the chunk data is also compressed (using brotli) and inserted into the output archive.

The final archive will contain a dictionary describing the order of chunks in the input file and the compressed chunks necessary to rebuild the input file. The archive will also contain the configuration used when scanning input for chunks.

On clone the dictionary and chunker configuration is first fetched from the remote archive. Then the given seed file(s) are scanned for chunks present in the dictionary. Scanning is done using the same configuration as when building the archive. Any chunk found in a seed file will be copied into the output file at the location(s) specified by the dictionary. When all seeds has been consumed the chunks still missing, if any, is fetched from the remote archive, decompressed and inserted into the output file.

To keep the HTTP overhead low while cloning all adjacent chunks are fetched with a single request. And if possible the same connection is used for the whole clone operation.

bita can also use the output file as seed and reorganize chunks in place. Except using this for the obvious reason of saving bandwidth this will also let bita avoid writing chunks that are already in place in the output file. This may be useful if writing to storage is either slow or we want to avoid tearing on the storage device.

Each chunk, both fetched from seed and from archive, is verified by its strong hash before written to the output. bita avoids using any extra storage space while cloning, the only file written to is the given output file.

The process of splitting a file into chunks is heavily inspired by the one used in rsync. Where a window of bytes (default 64 for RollSum and 20 for BuzHash) is sliding through the input data, one byte at a time.

For every position of the window a short checksum is generated. If we're assuming that the checksum has an even distribution we can say that with some probability this checksum will be within a range of values at every n interval of bytes, where n represents the average target chunk size.

When the checksum is within this range a chunk boundary has been found. A strong hash (blake2) is then generated for the data between the last boundary and this one. The strong hash is the one used to identify this chunk while the weaker rolling hash is never stored but only used for finding chunk boundaries.

The average target chunk size and the upper/lower limit of a chunk's size is runtime configurable.

The server serving bita archives can be any HTTP/HTTPS server supporting range requests, which should be most.

Clone and use output (/dev/mmcblk0p1) as seed while cloning:

Local archives can also be cloned: