It is able to operate both on regular and iterator algorithms -- the later being useful to test CRUD operations.

Reports are issued using the Big O Notation (hence the name) and it works by measuring how the algorithm's CPU times & RAM space requirements grow in relation to the amount of data or number of elements that it is applied on.

By using this crate on tests, you are enforcing -- through real measurements -- how your program should behave in regard to resource consumption -- allowing you to foresee, when in production, the resource requirements and, eventually, helping in the process of optimization, as you are free to do changes that are sure to cause a test failure when regressions in space or time complexities are introduced.

Furthermore, this crate is specially useful to analyse complex algorithms on complex execution scenarios, when a tradicional manual analysis is impossible to be done: a carefully crafted Big O Performance Test is able to investigate/enforce what inputs make up the worse acceptable performance case, best case and how, on average, the algorithm should perform on excerpts of real data.

This crate is, thus, meant to work as a development tool, alongside with tests & benchmarks.

A special method is provided to test CRUD operations, as in the example bellow: The optional measurement output issued by this test:

A regular, non-iterator algorithm is run only once for each pass -- in the example bellow, this algorithm is vec::sort(): 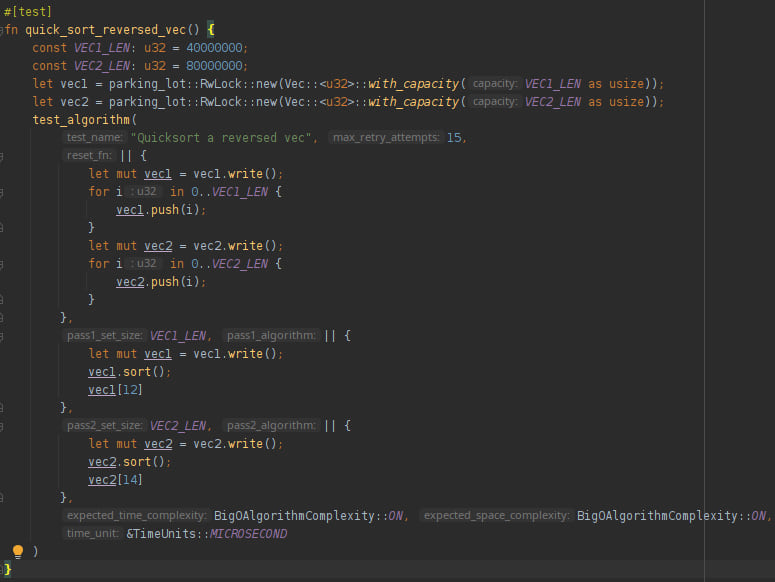 The optional measurement output issued by this test:

Then create an Integration Test, setting it up to execute tests linearly -- see tests/big_o_tests.rs for an example on how this may be easily achieved.

To measure the space resource requirements, this crate sets a custom Global Allocator capable of gathering allocation metrics. It only affects tests, but still imposes a non-negligible overhead -- each allocation / de-allocation updates a dozen atomic counters.