bao allows you to generate debug information from C code in the CodeView format, which is mostly known for its use in PDBs. JSON is used to assign the types and functions to addresses within the binary.

To showcase how bao works I will use a module from Valve's anti-cheat "solution" VAC. It's an ideal sample to test on, because the modules are rather small and as such can be fully analyzed very easily. Complimenting these conditions is the fact that the different modules are similar to each other as all of them I've analyzed contain the ICE cipher. 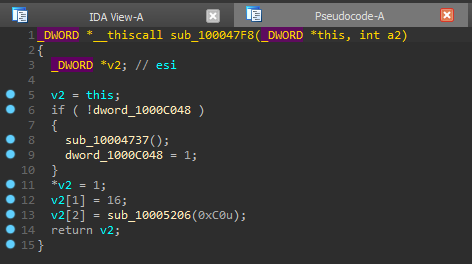 After applying a generated PDB by Bao 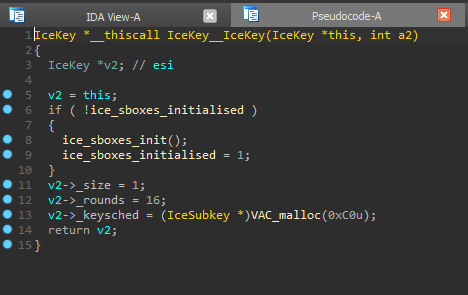 Generating the PDB as seen in the example is as easy as running bao -c config.json -- vac.dll src/structs.c. The resulting PDB will be saved as vac.dll.pdb in this example. You may pass the -o option to save the resulting PDB somewhere else.

The easiest way to run bao is to use Docker:

The first three commands are only necessary on your first run or after an update of bao.

Alternatively you can install the dependencies on your own machine. Be warned though, this is not recommended on a Windows machine!

You can use bao to: