The virtio-queue crate provides a virtio device implementation for a virtio queue, a virtio descriptor and a chain of such descriptors. Two formats of virtio queues are defined in the specification: split virtqueues and packed virtqueues. The virtio-queue crate offers support only for the split virtqueues format. The purpose of the virtio-queue API is to be consumed by virtio device implementations (such as the block device or vsock device). The main abstraction is the Queue. The crate is also defining a state object for the queue, i.e. QueueState.

Let’s take a concrete example of how a device would work with a queue, using the MMIO bus.

First, it is important to mention that the mandatory parts of the virtio interface are the following:

Each virtqueue consists of three parts:

Before booting the virtual machine (VM), the VMM does the following set up:

After the boot of the VM, the driver starts sending read/write requests to configure things like:

Once the queues are ready, the device can be used.

The steady state operation of a virtio device follows a model where the driver produces descriptor chains which are consumed by the device, and both parties need to be notified when new elements have been placed on the associate ring to avoid busy polling. The precise notification mechanism is left up to the VMM that incorporates the devices and queues (it usually involves things like MMIO vm exits and interrupt injection into the guest). The queue implementation is agnostic to the notification mechanism in use, and it exposes methods and functionality (such as iterators) that are called from the outside in response to a notification event.

The basic principle of how the queues are used by the device/driver is the following, as showed in the diagram below as well: 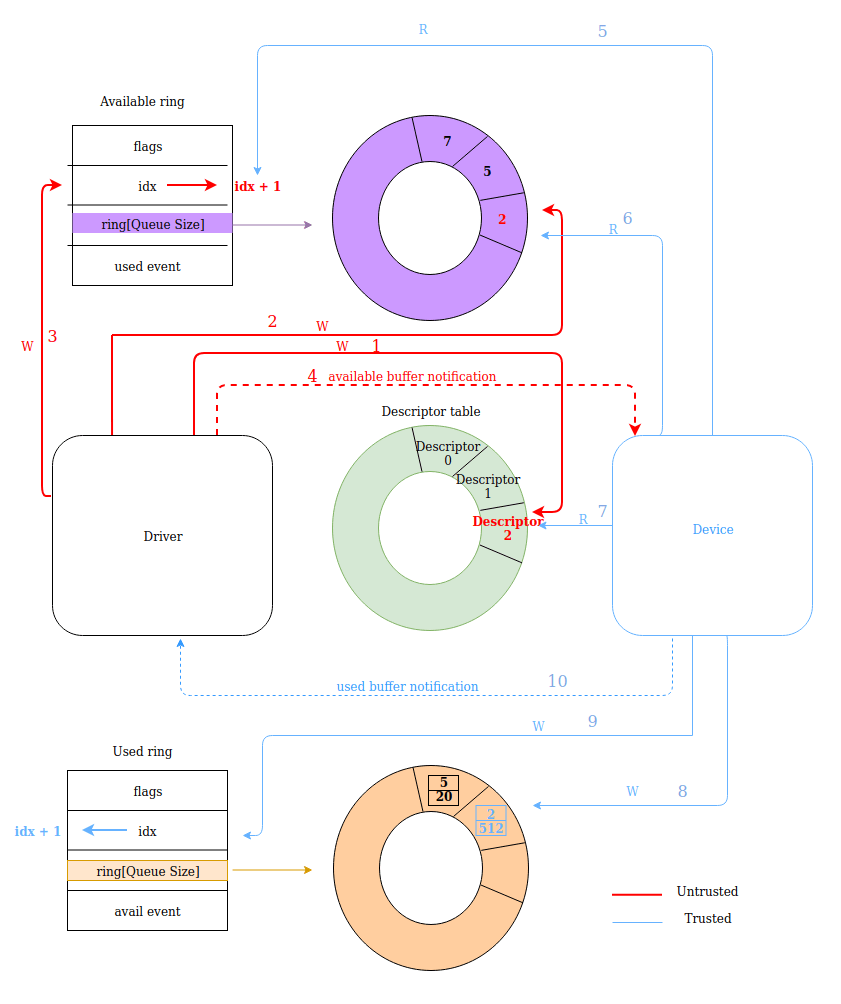 A descriptor is storing four fields, with the first two, addr and len, pointing to the data in memory to which the descriptor refers, as shown in the diagram below. The flags field is useful for indicating if, for example, the buffer is device readable or writable, or if we have another descriptor chained after this one (VIRTQ_DESC_F_NEXT flag set). next field is storing the index of the next descriptor if VIRTQ_DESC_F_NEXT is set.

Besides the above abstractions, the virtio-queue crate provides also the following ones:

The Queue abstraction is proposing the following sequence of steps for processing new available ring entries:

The above steps should be done in a loop to also handle the less likely case where the driver added new entries just before we re-enabled notifications.

We assume the users of the Queue implementation won’t attempt to use the queue before checking that the ready bit is set. This can be verified by calling Queue::is_valid which, besides this, is also checking that the three queue parts are valid memory regions. We assume consumers will use AvailIter::go_to_previous_position only in single-threaded contexts. We assume the users will consume the entries from the available ring in the recommended way from the documentation, i.e. device starts processing the available ring entries, disables the notifications, processes the entries, and then re-enables notifications.