SongRec is an open-source Shazam client for Linux, written in Rust. 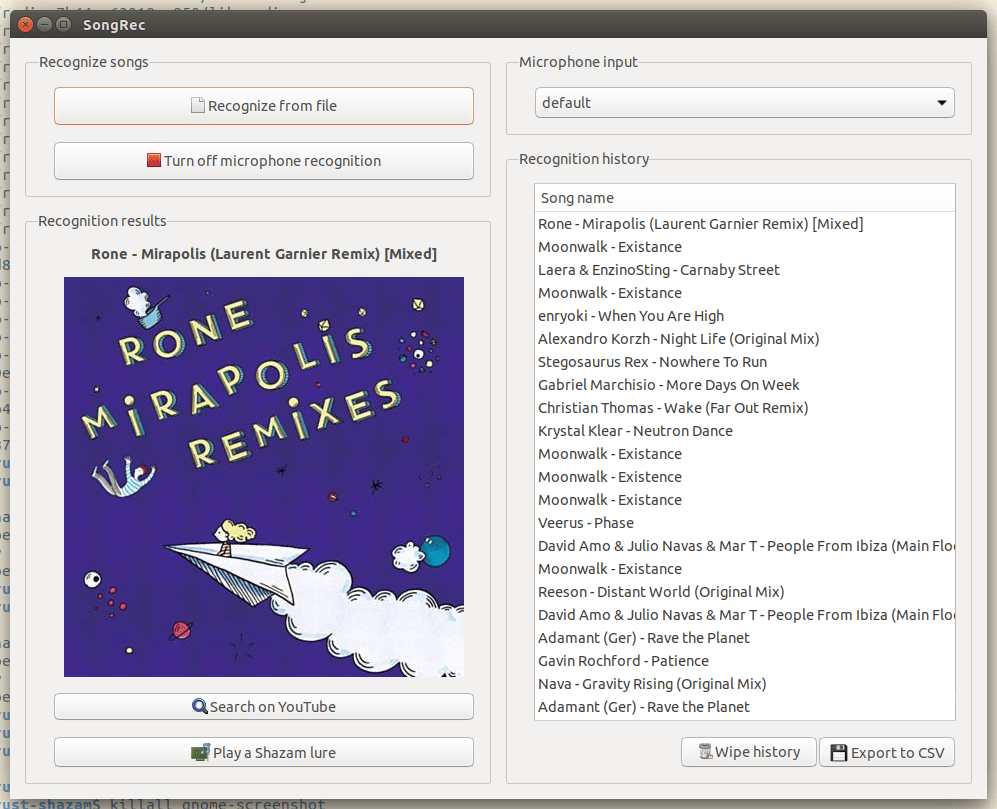 A (command-line only) Python version, which I made before rewriting in Rust for performance, is also available for demonstration purposes. It supports file recognition only.

For useful information about how audio fingerprinting works, you may want to read this article. To be put simply, Shazam generates a spectrogram (a time/frequency 2D graph of the sound, with amplitude at intersections) of the sound, and maps out the frequency peaks from it (which should match key points of the harmonics of voice or of certains instruments).

Shazam also downsamples the sound at 16 KHz before processing, and cuts the sound in four bands of 250-520 Hz, 520-1450 Hz, 1450-3500 Hz, 3500-5500 Hz (so that if a band is too much scrambled by noise, recognition from other bands may apply). The frequency peaks are then sent to the servers, which subsequently look up the strongest peaks in a database, in order look for the simultaneous presence of neighboring peaks both in the associated reference fingerprints and in the fingerprint we sent.

Hence, the Shazam fingerprinting algorithm, as implemented by the client, is fairly simple, as much of the processing is done server-side. The general functionment of Shazam has been documented in public research papers and patents.

Here are a few ways to install and run the application:

Using Flatpak (all distributions) (NOTE: with Flatpak, the GUI should work fine but some of the CLI features may not be usable due to filesystem sandboxing restrictions):

Using Cargo (all distributions, dependencies given for Ubuntu/Debian, if your rustc version is not recent enough please refer to the instructions below):

Note: It is not mandatory, but if you want to be able to recognize more formats than WAV, OGG, FLAC and MP3, you should ensure that you have the ffmpeg package installed.

(WARNING: Remind to compile the code in "--release" mode for correct performance.)

First, you need to install the Rust compiler and package manager. It has been observed to work with rustc 1.43.0 to the current rustc 1.47.0.

Install Rust and put it in path, for all distributions:

This will compile and run the projet:

For the latter, you will then find the project's binary (that you will be able to move or execute directly) at target/release/songrec.

Passing no arguments or using the gui subcommand will launch the GUI, and try to recognize audio real-time as soon as the application is launched:

Using the gui-norecording subcommand will launch the GUI without recognizing audio as soon as the software is started (you will need to click the "Turn on microphone recognition" button to do so):

The following subcommand will try to recognize audio from the middle of an audio file, and print the JSON response from Shazam servers:

The following subcommands will do the same with an intermediary step, manipulating data-URI audio fingerprints as used by Shazam internally:

The following will produce back hearable tones from a given fingerprint, that should be able to fool Shazam into thinking that this is the original song (either to the default audio output device, or to a .WAV file):

When using the application, you may notice that certain information will be saved to ~/.local/share/SongRec (or an equivalent directory depending on your operating system), including the CSV-format list of the last recognized songs and the last selected microphone input device (so that it is chosen back when restarting the app). You may want to delete this directory in case of persistent issues.

SongRec collects no data and contacts no other servers than Shazam's. SongRec does not upload raw audio data anywhere: only fingerprints of the audio are uploaded, which means sequences of frequency peaks encoded in the form of "(frequency, amplitude, time)" tuples.

This does not suffice to represent anything hearable alone (use the "Play a Shazam lure" button to see how much this is different from full sound); that means that no actually hearable sound (e.g voice fragments) is sent to servers, only metadata derived on the characteristics of the sound that may only suffice to recognize a song already known by Shazam is being sent.

This software is released under the GNU GPL v3 license. It was created with the intent of providing interoperability between the remote Shazam services and Linux-based deskop systems.

Please note that in certain countries located outside of the European Union, especially the United States, software patents may apply.