rebuilderd monitors the package repository of a linux distribution and uses rebuilder backends like archlinux-repro to verify the provided binary packages can be reproduced from the given source code.

It tracks the state of successfully verified packages and optionally generates a report of differences with diffoscope for debugging. Note that due to the early state of this technology a failed rebuild is more likely due to an undeterministic build process instead of a supply chain compromise, but if multiple rebuilders you trust report 100% reproducible for the set of packages you use you can be confident that the binaries on your system haven't been tampered with. People are encouraged to run their own rebuilders if they can afford to.

Accessing a rebuilderd instance in your browser

Many instance run a web frontend to display their results. rebuilderd-website is a very good choice and the software powering the Arch Linux rebuilderd instance:

Loading the index of all packages may take a short time.

It's also possible to query and manage a rebuilderd instance in a scriptable way. It's recommended to install the rebuildctl commandline util to do this:

You can then query a rebuilderd instance for the status of a specific package:

You have to specify which instance you want to query because there's no definite truth™. You could ask multiple instances though, including one you operate yourself.

If the rebuilder seems to have outdated data or lists a package as unknown the update may still be in the build queue. You can query the build queue of an instance like this:

If there's no output that means the build queue is empty.

If you're the administrator of this instance you can also run commands like:

Or immediately retry all failed rebuild attempts (there's an automatic retry on by default):

Running a rebuilderd instance yourself 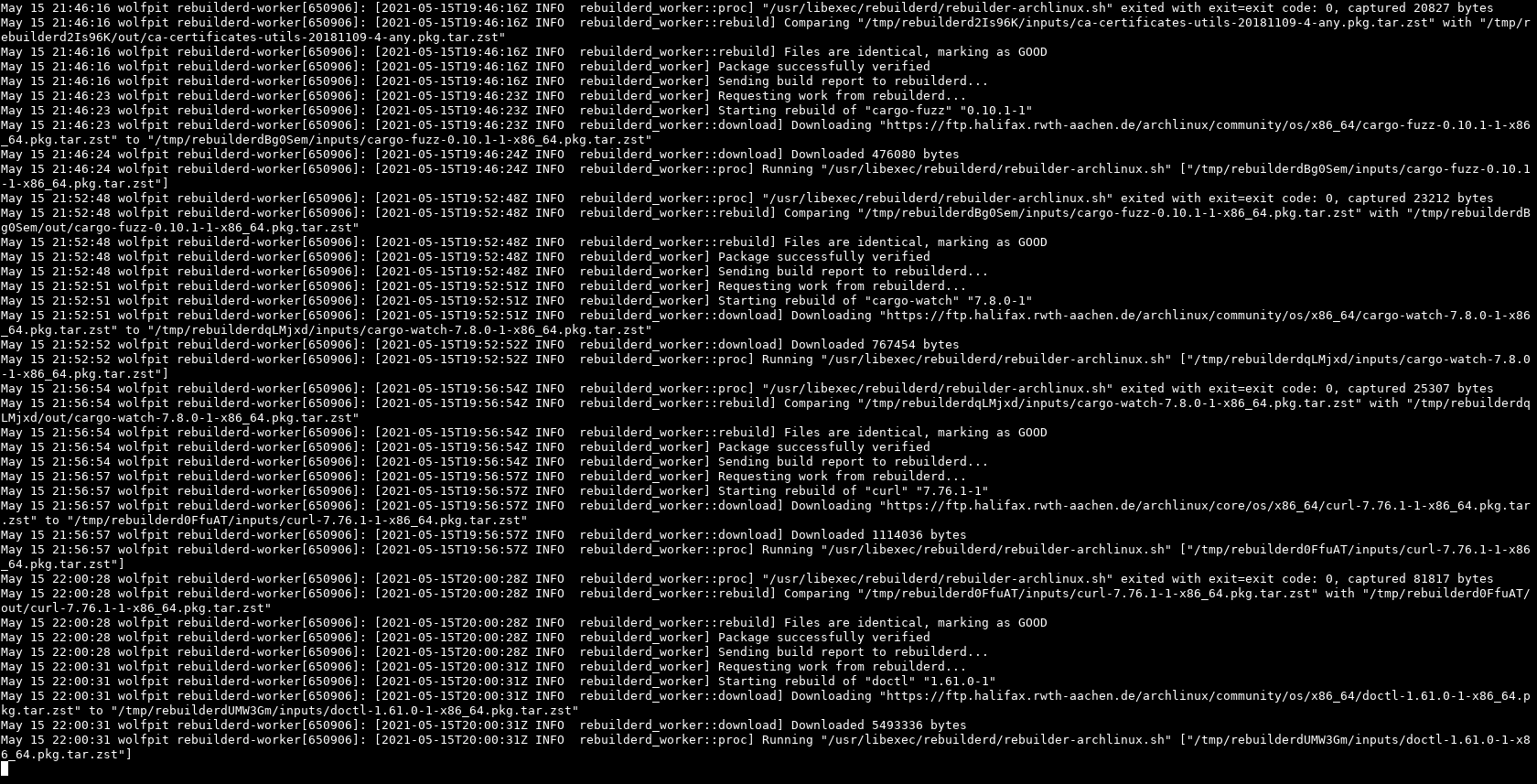 "I compile everything from source" - a significant amount of real world binary packages can already be reproduced today. The more people run rebuilders, the harder it is to compromise all of them.

At the current stage of the project we're interested in every rebuilder there is! Most rebuilderd discussion currently happens in #archlinux-reproducible on libera, feel free to drop by if you're running a instance or considering setting one up. Having a few unreproducible packages is normal (even if it's slightly more than the official rebuilder), but having additional people confirm successful rebuilds is very helpful.

Please see the setup instructions in the Arch Linux Wiki.

A rebuilder consists of the rebuilderd daemon and >= 1 workers:

Afterwards it's time to import some packages:

The --maintainer option is optional and allows you to rebuild packages by a specific maintainer only.

To show the current status of our imported packages run:

To inspect the queue run:

Rebuilderd development is currently funded by: