410 downloads per month
Used in 2 crates

Tomasz Stachowiak did a presentation at the Stockholm Rust Meetup on October 2019 about this project that goes through the technical details of how C++ to Rust bindings of physx-sys works: 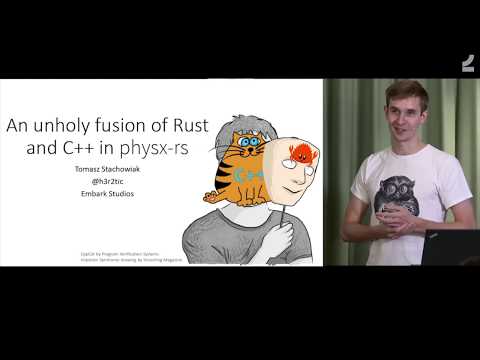 A simple example to showcase how to use physx-sys. It can be run with cargo run --examples ball.

The binding is generated using a custom C++ app written against clang's libtooling. It queries the compiler's abstract syntax tree, and maps the C++ PhysX functions and types to Rust using heuristics chosen specifically for this SDK. It is not a general C++ <-> Rust binding generator, and using it on other projects will likely crash and burn.

Since C++ does not have a standardized and stable ABI, it's generally not safe to call it from Rust code; since PhysX exposes a C++ interface, we can't use it directly. That's why physx-sys generates both a Rust interface as well as a plain C wrapper. The C code is compiled into a static library at build time, and Rust then talks to C.

In order to minimize the amount of work required to marshall data between the C wrapper and the original C++ API, we generate a bespoke C wrapper for each build target. The wrapper is based on metadata about structure layout extracted directly from compiling and running a tiny program against the PhysX SDK using the specific C++ compiler used in the build process.

Steps 2..4 are performed completely automatically from within build.rs, while step 1 is only necessary when upgrading the PhysX SDK or modifying the generator. As such, building and running pxbind is a manual task, and is currently only supported on *nix systems.

Since pxbind relies on unstable clang internals only specific clang/llvm versions are supported to build it. Currently supported versions are llvm-14 and libclang-14-dev. You may find it working with other versions but it's not guarenteed.

Note that the PhysX C++ SDK has its own BSD 3 license and depends on additional C++ third party libraries.

If you use cargo deny, you can use this clarification in your configuration, at least until crates.io supports parentheses.