Gattii is a serial terminal emulator that allows one to use a serial port for transmitting and receiving data. This project grew out of my desire to learn Rust. It aims to replace RealTerm_, and as such provide a very similar set of functionality. Realterm was invaluable in my robotics work with microcontrollers, but is not actively maintained, difficult to contribute to and improve, and full of bugs, both crashers and usability related.

The canonical repository for this crate is on GitLab, but it is mirrored on GitHub purely for testing via Travis CI. To report any issues or contribute code, please do so using through the GitLab repository.

The name Gattii refers to Cryptococcus Gattii, which is named in solidarity with Rust itself, which was named after the rust family of fungi. I forgot why I originally chose this name, but now I like it so I'm just gonna keep it. 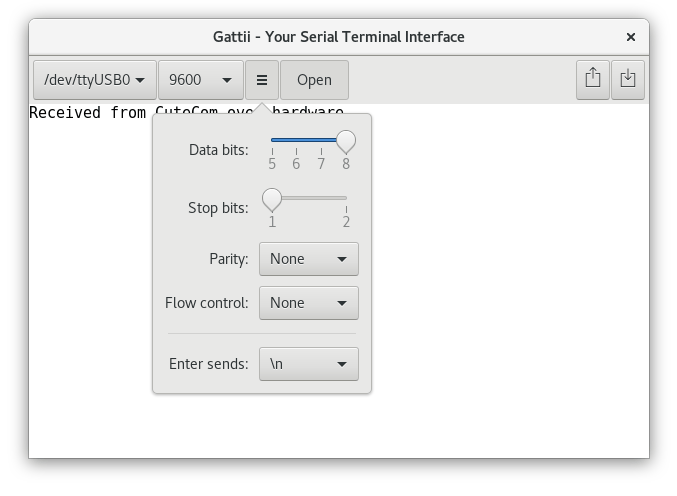 This software is written in Rust, and as such requires the Rust toolchain to be installed to build it. Additionally there are library requirements for some of supporting libraries (gtk-rs). As gtk-rs does not support anything older than the current Rust stable release, gattii is also limited to that.

The only tier-1 platform for this is Linux x64, as that's what I develop and test on. I try to be diligent at testing all functionality on Windows, but as it's not my primary OS, some things may slip through the cracks. Windows has Tier 2 support in that compilation testing is done on it, but I don't actively test functionality. Mac is Tier 3 in that compilation works, but serial enumeration isn't working until the serialport-rs 2.0 release, but do not expect this to work correctly on Mac.

This project is licensed under the GPL version 3 or later. See the LICENSE file for the license text.

If you received a compiled version of this code, a copy of the source code can be found online at https://gitlab.com/susurrus/gattii.

There are two ways to contribute to Gattii. The first is to file issues through the Gitlab issue tracker.

If you'd like to contribute code, you may submit a pull request through Gitlab:

The send file icon is Upload by AlePio from the Noun Project.