#25 in No standard library

Fontdue is a simple, no_std (does not use the standard library for portability), pure Rust, TrueType (.ttf/.ttc) & OpenType (.otf) font rasterizer and layout tool. It strives to make interacting with fonts as fast as possible, and currently has the lowest end to end latency for a font rasterizer.

Version 1.0: fontdue is designed to be a replacement for rusttype (link), ab_glyph (link), parts of glyph_brush (link), and glyph_brush_layout (link). This is a class of font libraries that don't tackle shaping.

Version 2.0: Shaping - the complex layout of text such as Arabic and Devanagari - will be added. There are two potential pure Rust libraries (allsorts or rustybuzz) that are candidates for providing a shaping backend to Fontdue, but are relatively immature right now.

A non-goal of this library is to be allocation free and have a fast, "zero cost" initial load. This library does make allocations and depends on the alloc crate. Fonts are fully parsed on creation and relevant information is stored in a more convenient to access format. Unlike other font libraries, the font structures have no lifetime dependencies since it allocates its own space.

These benchmarks measure the time it takes to generate the glyph metrics and bitmap for the text "Sphinx of black quartz, judge my vow." over a range of sizes. The lower the line in the graph the better. 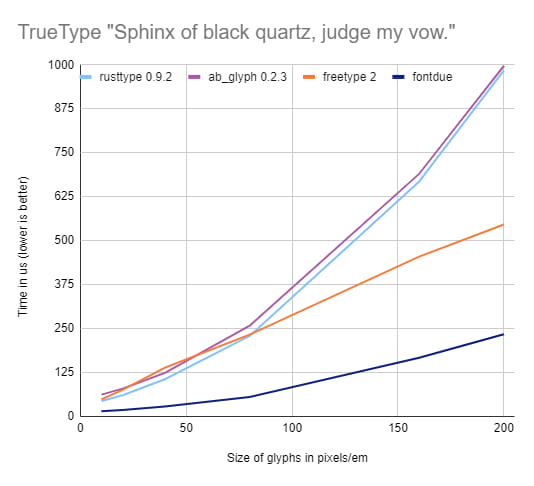 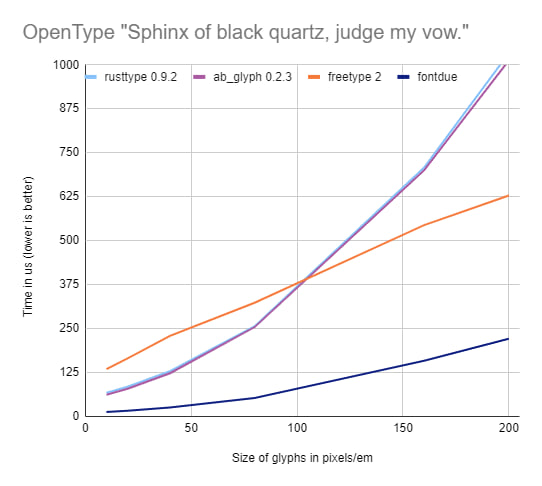 This benchmark measures the time it takes to layout latin characters of sample text with wrapping on word boundaries. 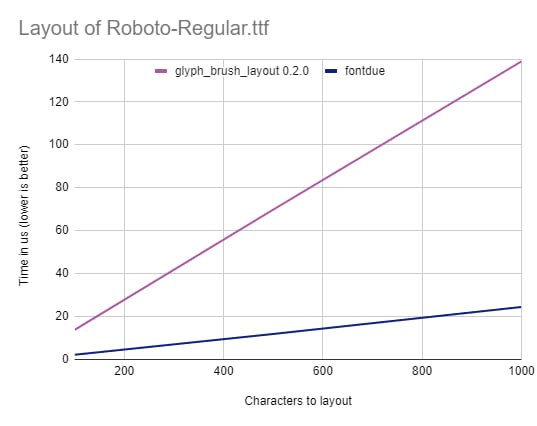 Please bear with me on new features or quirks that you find. I will definitely get to issues you open (also thank you for opening them), but I don't have as much time as I would like to work on fontdue so please be patient, this is a mostly solo project <3.

Fontdue depends on ttf-parser (link) for parsing fonts, which supports a wide range of TrueType and OpenType features.

Fontdue started as a slightly more production ready wrapper around font-rs (link) because of how fast it made rasterization look, and how simple the wonderful rusttype (link) crate made font parsing look. Since then, I've rewritten fontdue from the ground up, but I feel like it still deservers some attribution.