The implementation uses the BLS12-381 elliptic curve for pairing.

See the demo code which contains a complete usage of the API with detailed comments.

Run it as a test using

The crate is separated in 2 main modules:

To build the core only, run

To build the Cosmian interfaces without FFI, pass the interfaces feature flag, i.e.

To build everything, including the FFI, pass the ffi feature flag, or use --all-features i.e.

The code contains numerous tests that you can run using

Building the library for a different glibc

Go to the build directory for an example on hw to build for GLIBC 2.17

note: unfortunately, we cannot automatically tell Criterion to run benchmarks with ffi feature activated, we need to specify it.

To generate a Flamegraph on Criterion's benchmark:

Introduction to this repository cryptography

In a standard public-key encryption scheme, each user has his own public key and secret key, so that if one wants to encrypt a message intended for several receivers (for example, according to their jobs in a company), it will be necessary to compute the ciphertext for each public key of each recipient, which implies a huge loss of time and space.

While public key encryption is widely used and has a lot of interest in many applications, there is a limitation in this "one-to-many" scenario.

One might think that the trivial solution consisting of sharing a common secret key among all legitimate receivers would be sufficient. However, this is not the case, mainly because the security notions in "one-to-many" communications need to be extended to meet practical requirements. Therefore, if a common secret key is shared among all the receivers, then one of the receivers can give it to the adversary. Consequently, on the one hand, the confidentiality of the whole system is totally broken and on the other hand, we have no idea who the source of secret leakage is and we can not detect and exclude this source.

New schemes were developed recently to address this particular setting where the encrypted data is intended for multiple users.

Attribute-Based Encryption (ABE) is a relatively recent approach that aims to solve the problem of access control and "one-to-many" communications and storage. ABE defines the identity as a set of attributes, e.g., roles. This way messages can now be encrypted with respect to subsets of attributes or policies defined over a set of attributes (key-policy or ciphertext-policy).

First ABE scheme was formalised as Fuzzy Identity-Based Encryption in Fuzzy Identity-based Encryption. The main feature is that only users holding a key for "matching attributes" should be able to decrypt a ciphertext and user keys are always issued by some trusted party.

Some specificities of ABE schemes are: 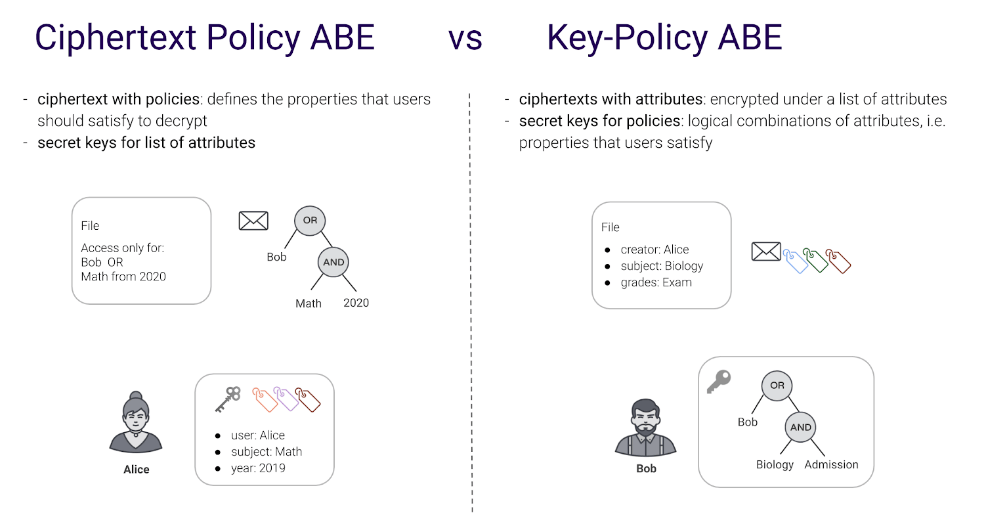 In Ciphertext-Policy Attribute-Based Encryption (CP-ABE), the access policy is encoded in the encrypted message; a ciphertext specifies an access policy over a defined universe of attributes within the system. A user’s private key is associated with a set of attributes which corresponds to a user’s identity: a user will be able to decrypt a ciphertext, if and only if his attributes satisfy the policy of the respective ciphertext. See for example BSW07.

In order to make policies more user friendly, Cosmian implements an indirection between the way the user expresses a policy and the actual attribute values used in GPSW.

From a user perspective, the overall policy is expressed as a set of policy axes. Each axis can be optionally marked as being hierarchical, and contains an enumeration of the possible values for that axis. For an hierarchical axis the attributes must be provided in ascending order.

Here, the use of axis allows to handle access policies encoded as CNF formulas.

From the master secret key, a derived decryption key for a user of the marketing department (MKG) with a medium security level will hold an access policy expressed as the boolean expression:

Finally, since attribute names are mapped to attribute values, the policy above is translated in GPSW as

This KP-ABE implementation is based on the crate cosmian_bls12_381, a pairing-friendly elliptic curve construction from the BLS family, with embedding degree 12. It is built over a 381-bit prime field GF(p) with...

BLS12-381 is chosen so that z has small Hamming weight (to improve pairing performance) and also so that GF(q) has a large 232 primitive root of unity for performing radix-2 fast Fourier transforms for efficient multi-point evaluation and interpolation. It is also chosen so that it exists in a particularly efficient and rigid subfamily of BLS12 curves.