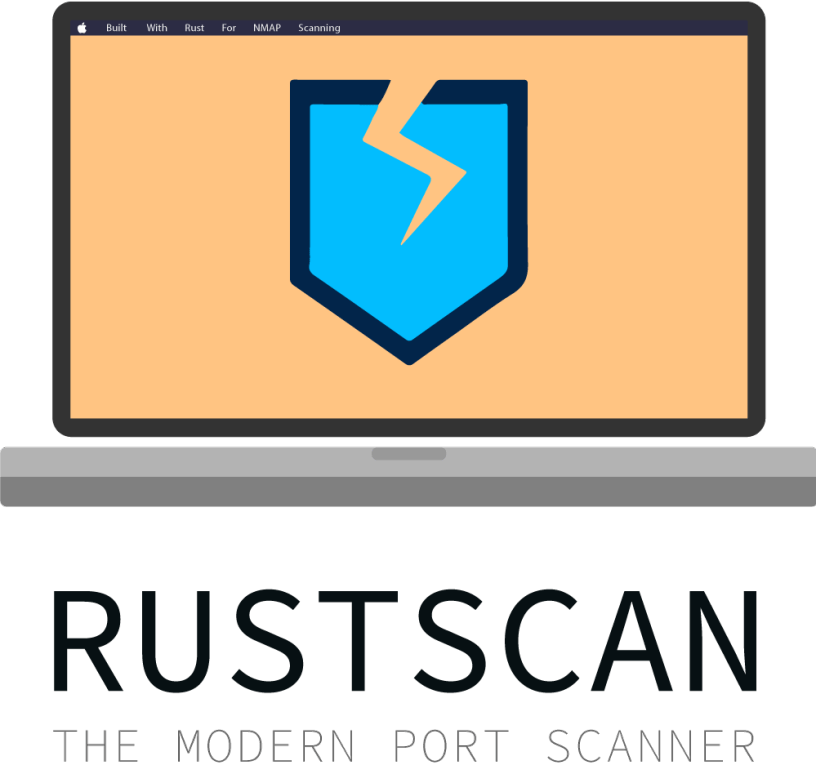 Turns a 17 minutes Nmap scan into 19 seconds.
Find all open ports fast with RustScan, automatically pipe them into Nmap.

Note This is an older gif. RustScan's current top speed is 3 seconds for all 65k ports. This gif is 26 seconds.

RustScans only job is to reduce the friction between finding open ports and inputting them into nmap.

Why spend time running fast scans and manually copying the ports, or waiting for a 20 minute scan to finish when you can just do all 65k ports in less than a minute?

RustScan running in 8 seconds and finding all open ports out of 65k.

You need Nmap. If you have Kali Linux or Parrot OS installed, you already have Nmap. If not, follow the nmap install guide.

The easiest way to install RustScan is to use one of the packages provided for your system, such as HomeBrew or Yay for Arch Linux.

The most universal way is to use cargo, Rust's built in package manager (think Pip but for Rust). Follow this guide to installing Rust & Cargo.

If you face any issues at all, please leave a GitHub issue. I have only tested this on Linux, so there may be issues for Mac OS or Windows.

Note: sometimes Rust doesn't add Cargo to the path. Please see this issue for how to fix that.

Run the command dpkg -i on the file.

Note: sometimes you can double click the file to achieve the same result.

Docker is the recommended way of installing RustScan. This is because:

Once Docker is installed, you can either build your own image using the Dockerfile (alpine) provided in the repo, or alternatively, use the published Docker image like below (most convenient)

Please see our DockerHub for further our published versions. However, we recommend using our latest release v1.9.0

We strongly recommend using the v1.9.0 tag, as this is the latest major - stable - release of RustScan. This README uses the v1.9.0 image by default, however, note that the latest image is considered experimental.

Simply run this command against the IP you want to target:

Note: this will scan the Docker's localhost, not your own.

Once done, you will no longer need to re-download the image (except when RustScan updates) and can use RustScan like a normal application.

You will have to run this command every time, so we suggest aliasing it to something memorable.

Then we can scan:

To build your own image:

Ensure you navigate to the download location of the repo:

Note for Mac users Mac OS has a very, very small ulimit size. This will negatively impact RustScan by a significant amount. Please use the Docker container, or tell RustScan to up the ulimit size on every run.

Here are all of RustScan's community distributions.

If you maintain a community distribution and want it listed here, leave an issue / pull request / Discord message or however you want to let us know.

The batch size determines how fast RustScan is. Set it to 65k, and it will scan all 65k ports at the same time. This means at at 65k batch size, RustScan will take TIMEOUT long to scan all ports. Essentially, if timeout is 1000ms, RustScan can scan in 1 second.

Your operating system may not support this, but it is worth it to play around and see where your open file limit is. Shortly I will be releasing a dockerised version with a much larger open file limit, so this will be possible.

This binary accepts a configuration file that is read from the home directory of the user. It follows the TOML format and accepts the following fields:

This may cause damage to a server, or may make it incredibly obvious you are scanning the server.

Servers as well as individual services can block your IP completely after a huge amount of simultaneous connections/tries, Possibly causing you to see false positives. False positives are open ports at the initial scanning process later found closed when you want to do further scanning, or connect to it.

There are 2 ways to deal with this;

You can also use both of these at the same time, to make it as slow or as fast as you want. A fun favourite is 65535 batch size with 1 second timeout. Theoretically, this scans all 65535 ports in 1 second.

Please do not use this tool against sensitive servers. It is designed mainly for Capture the Flag events, not real world servers with sensitive data.

🚨 Thread Panicked at Main: Too Many Open Files

This is the most common error found in RustScan.

The open file limit is how many open sockets you can have at any given time.

This limit changes from OS to OS.

RustScan does not automatically create defaults (other than 5000) like Nmap does with their -T1, -T2 system.

By figuring out for yourself the optimal batch size, you will know that RustScan is the most optimised port scanner for your system.

There are 2 things you can do:

Decreasing batch size slows down the program, so as long as it isn't too drastic, this is a good option.

They will give you an idea on the open file limit of your OS.

Increasing the open file limit increases speed, but poses danger. Although, opening more file sockets on the specified IP address may damage it.

To open more, set the ulimit to a higher number:

In this case, I would say it is safe to increase the open file limit. As most Linux based OS' have limits in the thousands.

Although, if this breaks anything, please don't blame me.

The best way is to use it on a host computer, in Docker, or in a VM that isn't WSL.

To run your own nmap commands, end the RustScan command with -- -A where -- indicates "end of RustScan flags, please do not parse anything further" and any flags after that will be entered into nmap.

If you want to run commands such as --script (vuln and safe), you will need to enclose it in quotations like so --script '"(vuln and safe) or default"'.

This increases speed, by allowing us to process more at once. Something experimental I am working on is changing the open file limit. You can do this manually with ulimit -n 70000 and then running rustscan with -b 65535. This should scan all 65535 ports at the exact same time. But this is extremely experimental.

For non-experimental speed increases, slowly increase the batch size until it no longer gets open ports, or it breaks.

To increase accuracy, the easiest way is to increase the timeout. The default is 1.5 seconds, by setting it to 4 seconds (4000) we are telling RustScan "if we do not hear back from a port in 4 seconds, assume it is closed".

Decreasing accuracy gives some speed bonus, but my testing found that batch size dramatically changed the speed whereas timeout did, but not so much.

RustScan is always looking for contributors. Whether that's spelling mistakes or major changes, your help is wanted and welcomed here.

Before contributing, read our code of conduct.

TL;DR if you abuse members of our community you will be perma-banned 🤗

RustScan has 2 major labels for GitHub issues you should look at:

If you want to, solve the issue or comment on the issue for help.

The flow for contributing to open source software is:

And then comment on the issue that you've done.

RustScan also has some // TODO's in the codebase, which are meant more for the core team but we wouldn't say no to help with these issues.

If you have any feature suggestions or bugs, leave a GitHub issue. We welcome any and all support :D

We communicate over Discord. Click here to join our Discord community!

I cannot pay you :-( But, I can place your GitHub profile on the README under #Contributors as a thank you! :)

Thanks goes to these wonderful people (emoji key):

This project follows the all-contributors specification. Contributions of any kind welcome!