697 downloads per month
Used in 3 crates

message-io is a fast and easy-to-use event-driven network library. The library handles the OS socket internally and offers a simple event message API to the user. It also allows you to make an adapter for your own transport protocol following some rules, delegating the tedious asynchrony and thread management to the library.

If you find a problem using the library or you have an idea to improve it, do not hesitate to open an issue. Any contribution is welcome!

Managing sockets is hard because you need to fight with threads, concurrency, full duplex, encoding, IO errors that come from the OS (which are really difficult to understand in some situations), etc. If you make use of non-blocking sockets, it adds a new layer of complexity: synchronize the events that come asynchronously from the Operating System.

message-io offers an easy way to deal with all these aforementioned problems, making them transparent for you, the programmer that wants to make an application with its own problems. For that, the library gives you a simple API with two concepts to understand: messages (the data you send and receive), and endpoints (the recipients of that data). This abstraction also offers the possibility to use the same API independently of the transport protocol used. You could change the transport of your application in literally one line.

Add to your Cargo.toml (all transports included by default):

If you only want to use a subset of the available transport battery, you can select them by their associated features tcp, udp, and websocket. For example, in order to include only TCP and UDP, add to your Cargo.toml:

Warning: Version 0.12 comes with important API changes (changelog) in order to reach zero-copy write/read goal. If you find problems porting your application to this version, check the examples folder, API docs, and don't hesitate to open an issue.

All in one: TCP, UDP and WebSocket echo server

The following example is the simplest server that reads messages from the clients and responds to them with the same message. It is able to offer the "service" for 3 differents protocols at the same time.

The following example shows a client that can connect to the previous server. It sends a message each second to the server and listen its echo response. Changing the Transport::FramedTcp to Udp or Ws will change the underlying transport used.

Clone the repository and test the Ping Pong example (similar to the README example but more vitaminized).

You can play with it by changing the transport, running several clients, disconnecting them, etc. See more here.

Do you need a transport protocol that message-io doesn't have? Add an adapter!

message-io offers two kinds of API. The user API that talks to message-io itself as a user of the library, and the internal adapter API for those who want to add their protocol adapters into the library. 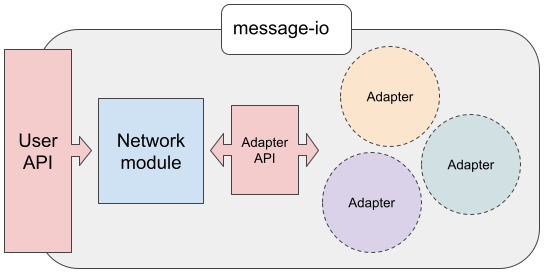 If a transport protocol can be built in top of mio (most of the existing protocol libraries can), then you can add it to message-io really easily:

That's all. You can use your new transport with the message-io API like any other.

Oops! one more step: make a Pull Request so everyone can use it :)

Does your awesome project use message-io? Make a Pull Request and add it to the list!