Kiro is a tiny UTF-8 text editor on terminal written in Rust. Kiro was started as a Rust port of awesome minimal text editor kilo and has grown with various extensions & improvements.

It provides basic features as a minimal text editor:

I learned various things by making this project following 'Build Your Own Text Editor' guide. Please read 'Implementation' section below to find some interesting topics.

And several keys with Ctrl or Alt modifiers are mapped to various features. You don't need to remember all mappings. Please type Ctrl-? to know all mappings in editor.

Here is some screenshots for basic features.

Kiro is a UTF-8 text editor. So you can open/create/insert/delete/search UTF-8 text including double width characters support.

Note that emojis using U+200D (zero width joiner) like '👪' are not supported yet.

Kiro utilizes colors as much as possible looking your terminal supports. It outputs 24-bit colors with gruvbox color scheme falling back to 256 colors or eventually to 16 colors. Kiro supports undo/redo editing (Ctrl-U for undo, Ctrl-R for redo). Max number of history entries is 1000. After exceeding it, oldest entry is removed on adding new change to text.

This project was a study to understand how a text editor can be implemented interacting with a terminal application. I learned many things related to interactions between terminal and application and several specs of terminal escape sequences such as VT100 or xterm.

I started from porting an awesome minimal text editor kilo following a guide 'Built Your Own Text Editor'. And then I added several improvements to my implementation.

Here I write topics which were particularly interesting for me.

However, it is insufficient and I felt some performance issue on editing larger (10000~ lines) C file.

So Kiro improves the implementation to render the screen and to update highlighting only when necessary.

Kiro has a variable dirty_start in Screen struct of screen.rs. It manages from which line rendering should be started.

For example, let's say we have C code bellow:

In the case, first line does not change. So we don't need to update the line. However, Kiro renders the } line also even if the line does not change. This is because modifying text may cause highlight of lines after the line. For example, when deleting " after \n, string literal is not terminated so next line continues string literal highlighting.

kilo only supports ASCII text. Width of ASCII character is fixed to 1 byte. This assumption reduces complexity of implementation of kilo greatly because:

So kilo can contain text buffer as simple char * and accesses characters in it via byte index. In addition, display width of all printable ASCII characters is fixed except for 0x09 tab character.

But actually there are more characters in the world defined as Unicode characters. Since I'm Japanese, the characters such as Kanji or Hiragana I'm daily using are not ASCII. And the most major text encoding is UTF-8. So I determined to extend Kiro editor to support UTF-8.

In UTF-8, byte length of character is variable. Any character takes 1~4 bytes (or more in special case). The important point here is that accessing to character in UTF-8 text is not O(1). To access to N-th character or to know length of text, it requires to check characters from head of the text.

Accessing to character in text and getting text length happen frequently while updating text buffer and highlights. So checking them in O(N) for each time is not efficient. To solve this problem, Kiro contains byte indices of each characters in line text as Vec<usize>. These indices are only existing when at least one character in line text is non-ASCII character. In Row struct which represents one text line, indices field (Vec<usize>) is dedicated to store byte indices of each character.

In the first case "Rust is nice", all characters are ASCII so byte index can be used to access to characters in the text. In the case, indices field is an empty (and capacity is set to zero). A Vec instance with zero capacity is guaranteed not to allocate heap memory. So the memory overhead here is 24 bytes of Vec<usize> instance itself (pointer, capacity as usize and length as usize) only.

Though keeping byte indices in Vec<usize> is quite memory inefficient, the indices are only required when the line text contains non-ASCII characters. In terms of programming code editor, it is relatively rare case, I believe.

Text Editing as Sequence of Diffs

One undo is represented as multiple diffs, not one diff. This is because users usually don't want to undo per inserting one character. So diffs each character inserts a character is put together as one undo. 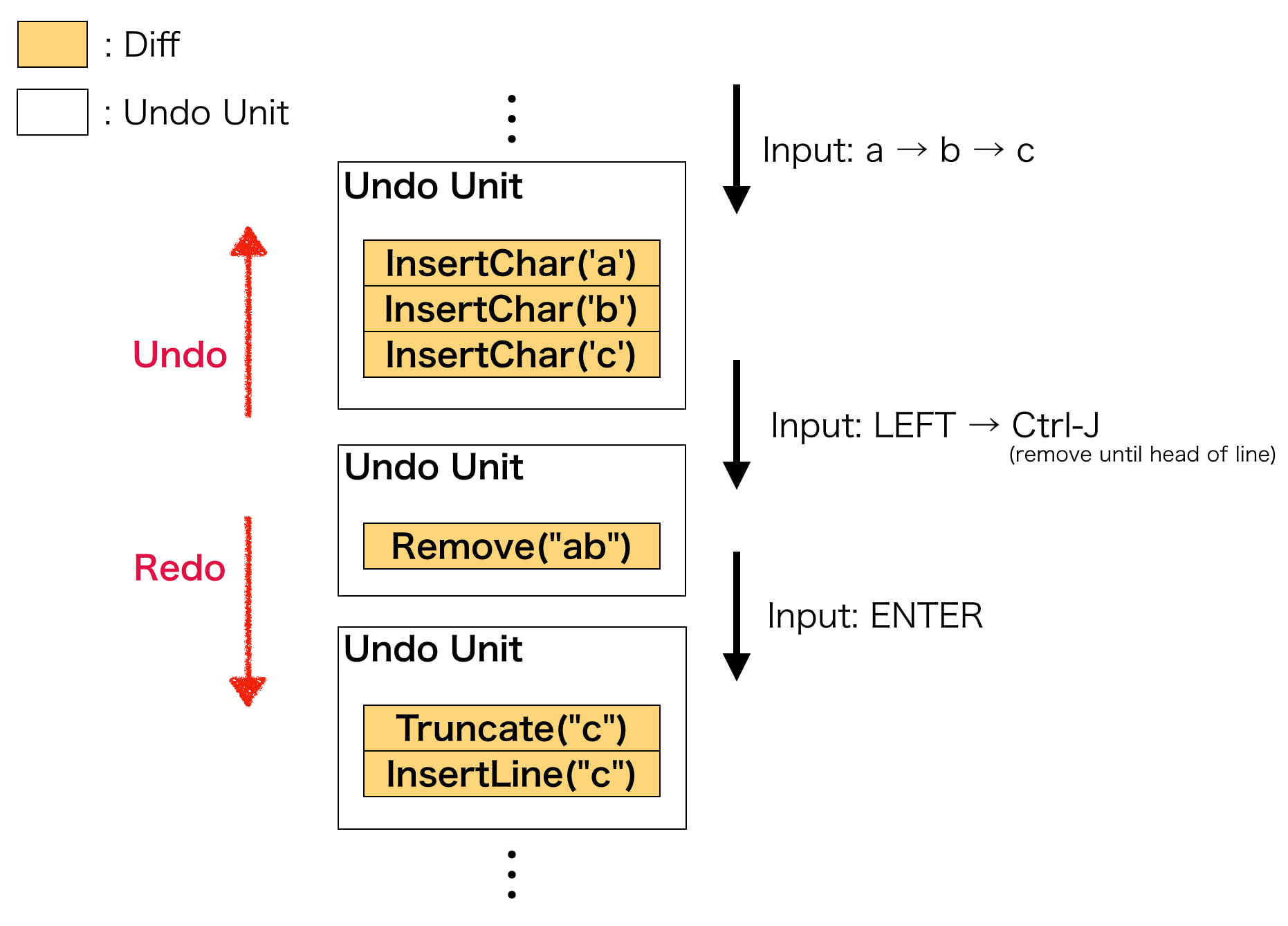 Normal input is also treated as redo internally so that editor doesn't need to handle normal input with separate implementation.

To simplify and minimize implementation, kilo uses some global variables and local static variables. Editor's state is stored in a global variable E and it is referred everywhere.

While porting the code to Rust, I split kilo.c into some Rust modules for each logics. I removed the global variables and local static variables by moving them to each logic's structs.

Error handling and resource clean up

kilo outputs message by perror() and immediately exits on error. It also cleans up STDIN configuration with atexit hook.

Kiro is implemented in Rust. So it utilizes Rust idioms to handle errors with io::Result and ? operator. It reduces codes for error handling so that I could focus on implementing editor logics.

The drop() method is called when StdinRawMode instance dies. So user doesn't need to remember the clean up. And StdinRawMode also implements Deref and DerefMut so that it behaves almost as if it were Stdin. By wrapping io::Stdin like this, I could add the ability to enter/leave terminal raw mode to io::Stdin.

Abstract input and output of editor

The output of terminal text editor is also stream of sequences to terminal which include output strings and control sequences. It's done by simply writing to stdout. So it is represented with Write trait.

By using these mocks the input and output of editor can be tested easily as follows:

This project depends on some small crates. I selected them carefully not to prevent learning how a text editor on terminal works.

Benchmarks are done by [cargo bench][cargo-bench] and fuzzing is done by cargo fuzz and libFuzzer.

Benchmark results run on GitHub Action is gathered to this page continuously:

This project is distributed under the MIT License.