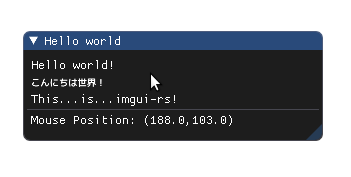 Additionally, the following are no longer maintained, but might work still:

The MSRV for imgui-rs and all of the backend crates is 1.54. We update our MSRV periodically, and issue a minor bump for it.

Choosing a backend platform and a renderer

Almost every application that uses imgui-rs needs two additional components in addition to the main imgui crate: a backend platform, and a renderer.

imgui-rs is not tied to any particular renderer or platform.

The backend platform is responsible for integrating imgui-rs with the operating system and its window management. Its responsibilities include the following:

The renderer is responsible for taking generic, renderer-agnostic draw lists generated by imgui-rs, and rendering them using some graphics API. Its responsibilities include the following:

We provide the following renderers as an official source (ie, they will always be up to date and working): imgui-glow-renderer and imgui-glium-renderer.

Additionally, we provide the following backends as an official source (ie, they will always be up to date and working): imgui-winit-support and imgui-sdl2-support.

Additionally, there are other libraries which provide other kinds of renderers, which may be out of date with imgui-rs releases, but might work well for your use case:

You can also write your own support code if you have a more advanced use case, because imgui-rs is not tied to any specific graphics / OS API.

Compiling and running the demos

Main examples are located in the imgui-examples directory. These can be run like so:

Examples for the Glow renderer are under the imgui-glow-renderer/examples/ directory. These can be run the same way as any other examples:

Note to Windows users: You will need to use the MSVC ABI version of the Rust compiler along with its associated dependencies to build this libary and run the examples.