A library to visualize tree structures, tailored for the id_tree crate.

This crate evolved as a side-product while working on a parser generator.

To check the correctness of generated parsers I needed to visualize large parse trees. The id_tree's own write_formatted method is quite handy for smaller trees but quickly reaches its limits when trees starts to grow.

So I wanted to have something that is more visually comprehensible.

And here is what the result may look like: 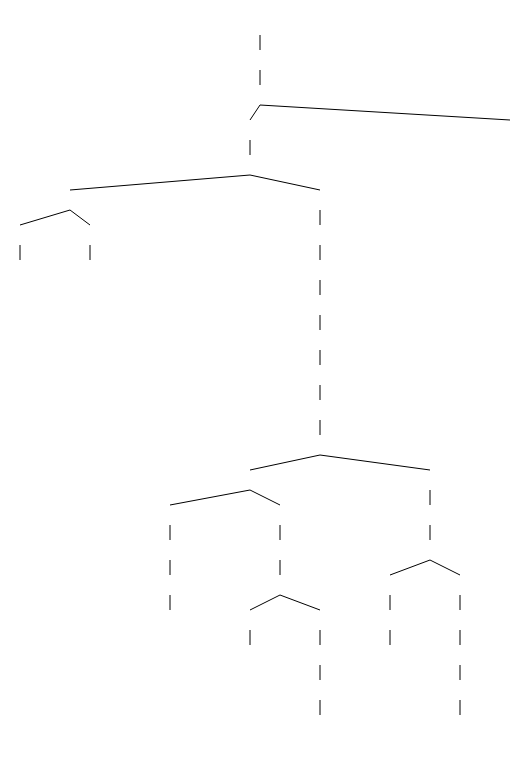 It turned out that the task to visualize trees is a universal one. So I decided to provide a separate crate for the community.

While striving for universality it was not easy to completely abstract from the concrete tree data structure people might ever use. Thus I decided to use the well known id_tree's tree implementation as the foundation for this crate.

The other abstraction I wanted to face was the concrete node data type and how it should be presented for a tree visualization. To resort to the implementation of the node's data type's Display trait seemed not to be specific enough. It would imply that the visualization of a node in a graph is the same as the one used on console display.

As a solution with lowest impact on users' code I decided to demand from the user to implement one single trait for his node's data type: Visualize. This trait only contains two methods and only one of them is mandatory to implement.

With this in mind there are two major restrictions one should know when to consider this crate to visualize trees:

The library provides a third abstraction. It is about how an embedding of nodes in the plane is presented to the user, i.e. in which format the embedding is converted in the end. For the sake of simplicity the id_tree_layout crate offers a simple default solution for this task, the SvgDrawer type. It provides elementary representation of the embedding in SVG format. But if the user wants to use its own realization, for instance to print the embedding onto a bitmap, he can integrate into the graph generation easily. For this he needs to implement his own drawer algorithm and implement the Drawer trait for it. Then he can use the Layouter's with_drawer method to supply it to the drawing procedure.