Inter is a typeface specially designed for user interfaces with focus on high legibility of small-to-medium sized text on computer screens.

The family features a tall x-height to aid in readability of mixed-case and lower-case text. Several OpenType features are provided as well, like contextual alternates that adjusts punctuation depending on the shape of surrounding glyphs, slashed zero for when you need to disambiguate "0" from "o", tabular numbers, etc. 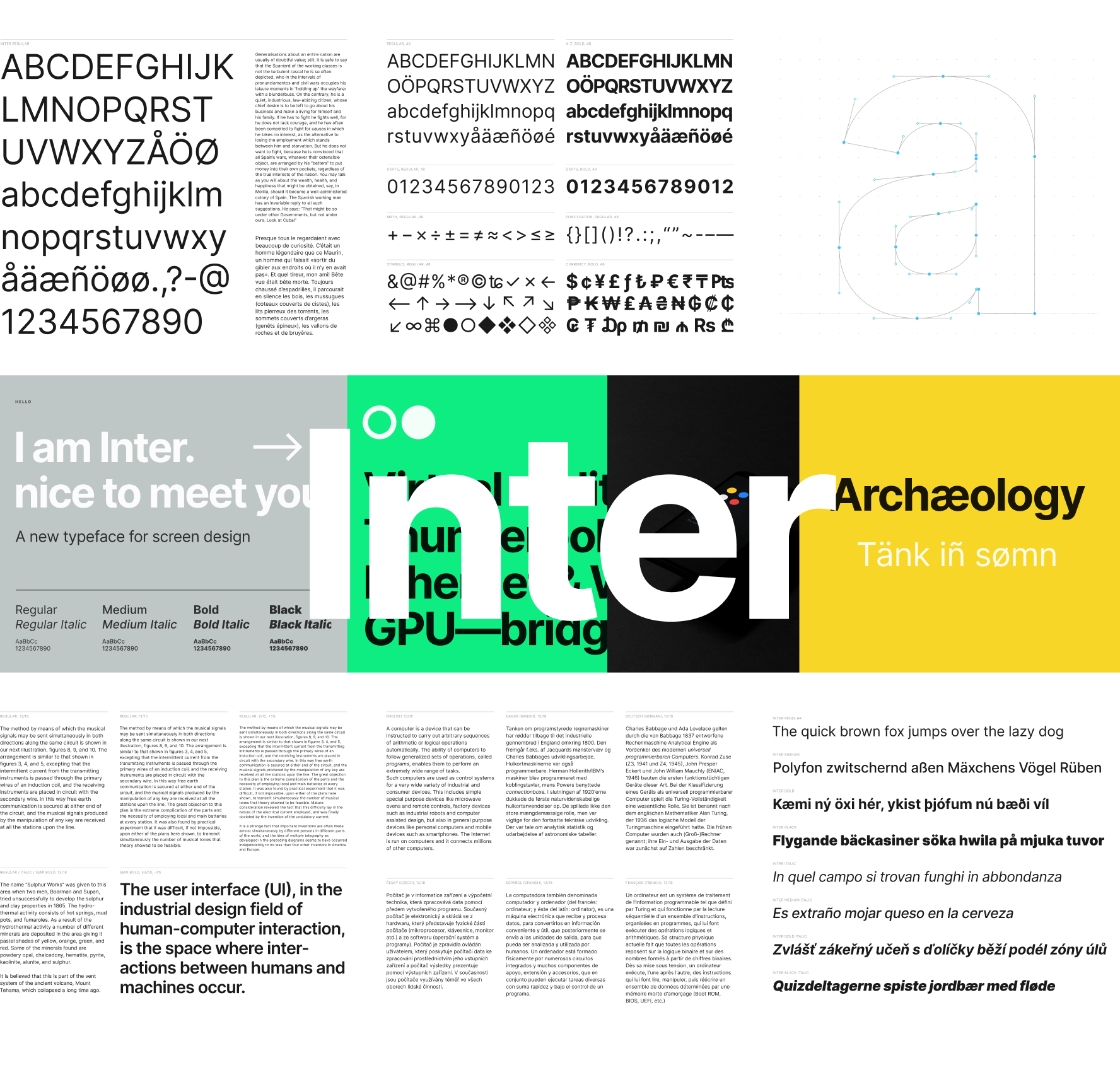 After downloading the zip from above:

Font files are also available from the following third-party distributors:

Disclaimer: Third-party packages may not always be up-to-date.

Inter is similar to Roboto, San Francisco, Akkurat, Asap, Lucida Grande and other "UI" and "Text" typefaces. Some trade-offs were made in order to make this typeface work really well at small sizes:

This font was originally designed to work at a specific size: 11px. Thus, the Units per EM (UPM) is defined in such a way that a power-of-two multiple of one EM unit ends up at an integer value compared to a pixel. Most fonts are designed with a UPM of either 1000 or 2048. Because of this we picked a value that is as high as possible but also as close as possible to one of those common values (since it's reasonable to assume that some layout engines and rasterizers are optimized for those value magnitudes.) We ended up picking a UPM of 2816 which equates to exactly 256 units per pixel when rasterized for size 11pt at 1x scale. This also means that when rasterized at power-of-two scales (like 2x and 4x) the number of EM units corresponding to a pixel is an integer (128 units for 2x, 64 for 4x, and so on.)

However, as the project progressed and the typeface was put into use, it quickly became clear that for anything longer than a short word, it was actually hard to read the almost monotonically-spaced letters.

A second major revision was created where the previously-strict rule of geometry being even multiples of 256 was relaxed and now the rule is "try to stick with 128x, if you can't, stick with 64x and if you can't do that either, never go below 16x." This means that Inter is now much more variable in pace than it used to be, making it work better at higher resolutions and work much better in longer text, but losing some contrast and sharpness at small sizes. 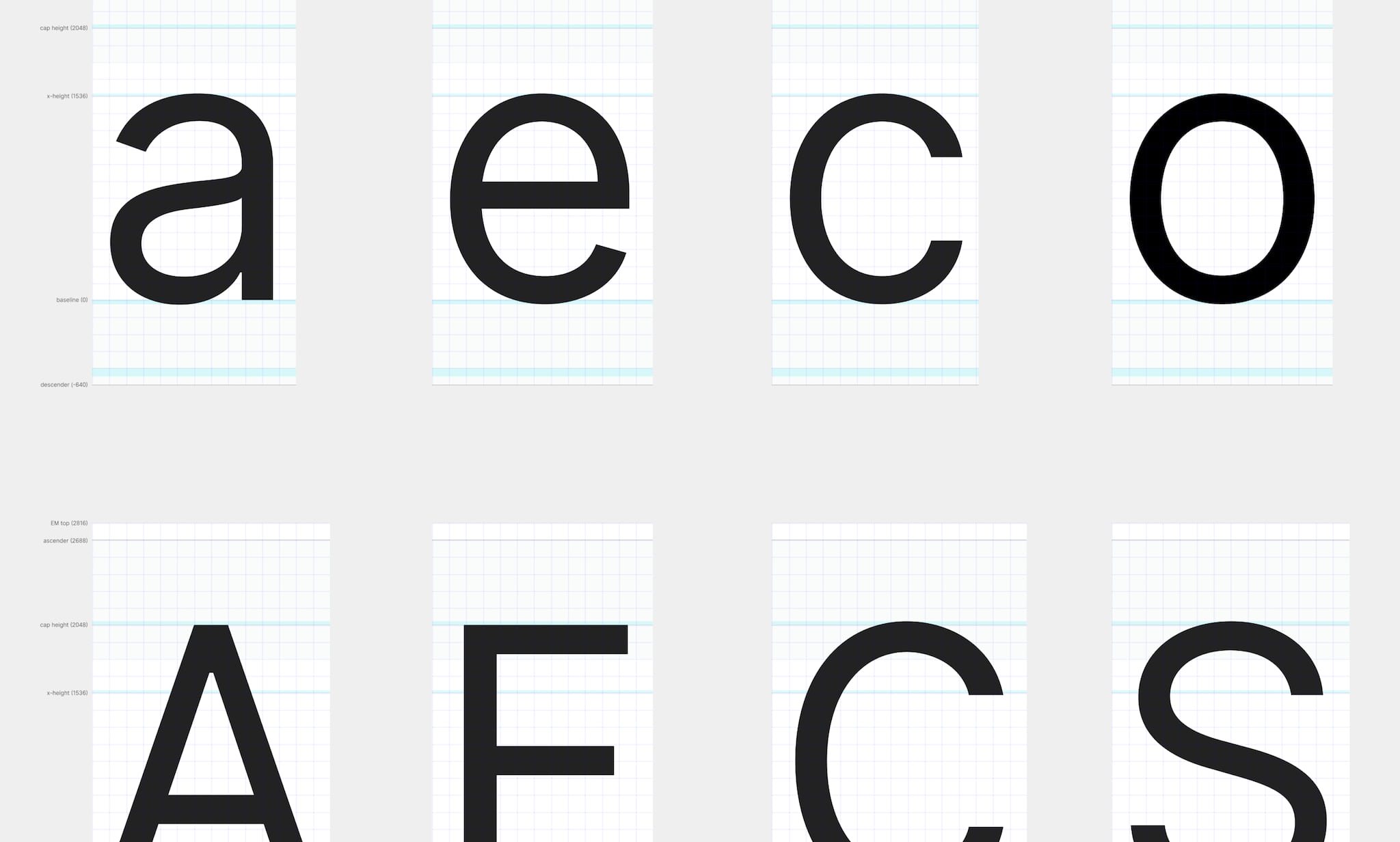 A UPM of 2816 is great for Inter since that means that its cap height is exactly 2048 units (64× 32-unit squares) and its x-height is 1536 (48× 32-unit squares) which both makes the design easier (can deal with only integers, never any fractions, plus use a perfect grid) and it makes the target "small size" of 11dp a pixel-perfect match — at 11px rasterization 1 pixel is exactly 256 units in the design! At 11dp with a 2x scaling factor 1 pixel is 128 units, 64 units at a 3x scaling factor and so on. This makes it feasible to really tune Inter for detailed rasterization. Translating between EM units and pixels:

A wholehearted Thank You to everyone who supports the Inter project!

For instructions on how to work with the source files and how to compile & build font files, refer to CONTRIBUTING.md.

Inter is licensed under the SIL Open Font License