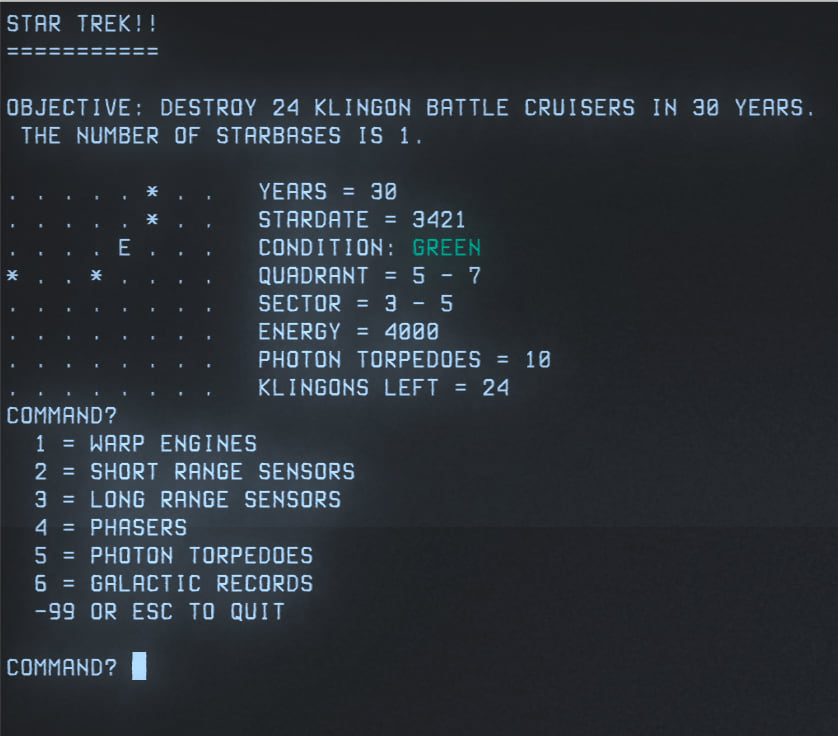 StarTrust is a rewrite of a "classic" computer game from 1978 called "Star Trek", originally written in incomprehensible BASIC, in more comprehensible (currently rather messy) Rust.

It's a text game, so loosely based on the TV Series/Franchise that it essentially has nothing to do with it except colorful nomenclature. These days, one would probably think of it as a "roguelike", but Rogue had not been written by this time, so it was just a game that you play in one sitting with perma-death that is a challenge to win (and is turn based and character mode).

The game underwent a series of mutations, evolving into "Super Star Trek", with many more features (everything was kind of unofficially open source at the time, so people modified stuff and improved it constantly, but there was no github either, so everything was effectively a fork).

I first became aware of the game only a few years after it was written (because, I am ancient), and I bought the now legendary "BASIC COMPUTER GAMES" book, by David Ahl, which had a source code listing in tiny type.

I stopped playing when Rogue (the most roguelike roguelike!) appeared, and then I played its various descendants, but I remembered "Star Trek" as being fun.

During this time, Bob Sorem did some rewriting, and he produced a C version. It is this C version that I actually used as my template.

The game live on in the "BSD Games" package, with many of its contemporaries. It has aged less badly than most of those games, and can actually even be fun.

I decided, as I described above, to rewrite the C version in Rust. This version is more readable and less monstrously written than the BASIC version, but also has a more minimalist feature set.

The approach that a reasonable person would take to this would be to read the entire sources (all in one .c file, actually), understand it, and begin with a blank slate.

I didn't do that. It shows. I didn't have the patience

What I did "in order to save time" (yeah, right) was subdivide it into sections and try to do a naïve rewrite of just that section into something closer to comprehensible, then worked with that.

That worked, but took quite a while.

The extant Rust code is pretty terrible and continues to be full of vestigial garbage, but it produced a playable game, and so I played it and found, to my shock, that it was kind of fun.

To play the game, you can just do cargo run, or you can build the application and run that (why no, I have not built binaries for your platform, thank you for asking). I don't know if it will work on your platform (it should), but I will cheerfully take PRs if you are a person of such character that you would create a PR for a game from 1978 or whatever.

I felt like it. I can't really explain it. I was having a very difficult time in my life, and this felt like something that I could do to clear my mind and help me through.

I always liked this game, and I felt as if revivifying it would be fun for everyone, and maybe even inspiring. And it was (see below)!

Surprisingly, as I sat down to write this README, I discovered that Emanuele Bolognesi rewrote it in Lua a few months earlier and wrote a medium post about it. His rocks. You should play his.

Or just play the BSD Games one, or write one of your own.

I wrote this, made it work, and played it a bunch. It is surprisingly balanced and challenging without being frustrating, being full of 1978 BASIC magic.

But earlier I mentioned that I thought it might inspire me. That happened.

I began to formulate a modern game that was a new take on this old game, a space based roguelike with nostalgic callbacks to this ancient bit of code.

Because of this, I began to read about Rust game frameworks/Engines, specifically Bevy & Amethyst. And I began to code up a (very minor) storm during the winter holidays.

I'll put a link to that HERE when I have something presentable.

But what are my plans for StarTrust?

Maybe nothing. Maybe I walk away. However:

But, probably I will do nothing.