The Poisson disk distribution produces samples of which no two samples are too close to each other. This results in a more uniform distribution than from pure random sampling. 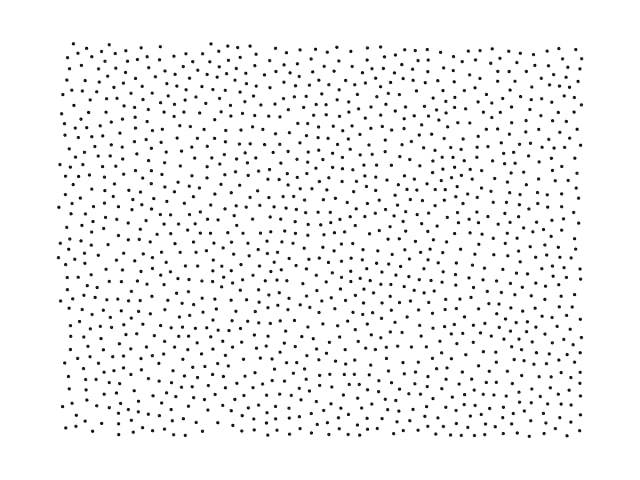 See the documentation for more information about the library.

Add the library as a dependency to your project in Cargo.toml:

From 1.0.0 the minimum supported version of Rust is 1.51, due to the use of const generics. The pre-release versions (until 1.0.0-pre.4) support earlier versions of Rust.

To sample, the Bridson algorithm requires:

The sampled points are returned in a standard vector Vec<[f64; D]>, where each point is of type [f64; D]: a D-dimensional array with the coordinates for each axis. The dimension D is identical to that of the given box_size.

The algorithm can sample in an arbitrary number of dimensions, although it is very slow.

Use the use_pbc parameter to control whether the algorithm should look for neighbours within the minimum distance in periodic images of the space. This is slower: about 25%-50% for the same number of generated points in two and three dimensions.

In short, I would currently recommend against using this for work where the distribution of points is critical. Or, at the very least, to inspect the results before use.

Should you use this library?

Probably not. The results are decent (but not great) and thousands of points are generated in milliseconds on reasonably modern hardware. However, in absolute speed testing the library is worse by an order of magnitude compared to many other implementations in C and even Python.

This is likely due the inefficient grid search which is implemented recursively in order to work with an arbitrary number of dimensions. This may or may not be improved.

This library is offered under the permissive Blue Oak license. See LICENSE.md for more details.