This package implements the “OMG-WTF-8” encoding, making it suitable for use as a pattern via the “Pattern 1.5” API, so it doesn’t need two separate Pattern APIs from “Pattern 2.0”.

These two decisions together means we cannot split a well-formed WTF-8 string in the middle of a surrogate pair, which makes it impossible to implement some common string APIs like split().

The modified WTF-8 encoding addresses this by allowing a 4-byte sequence be split into halves, to represent a lone surrogate code point at the beginning or end. To see why this is possible, let’s check the encoding of non-BMP characters in UTF-8, -16 and -32. 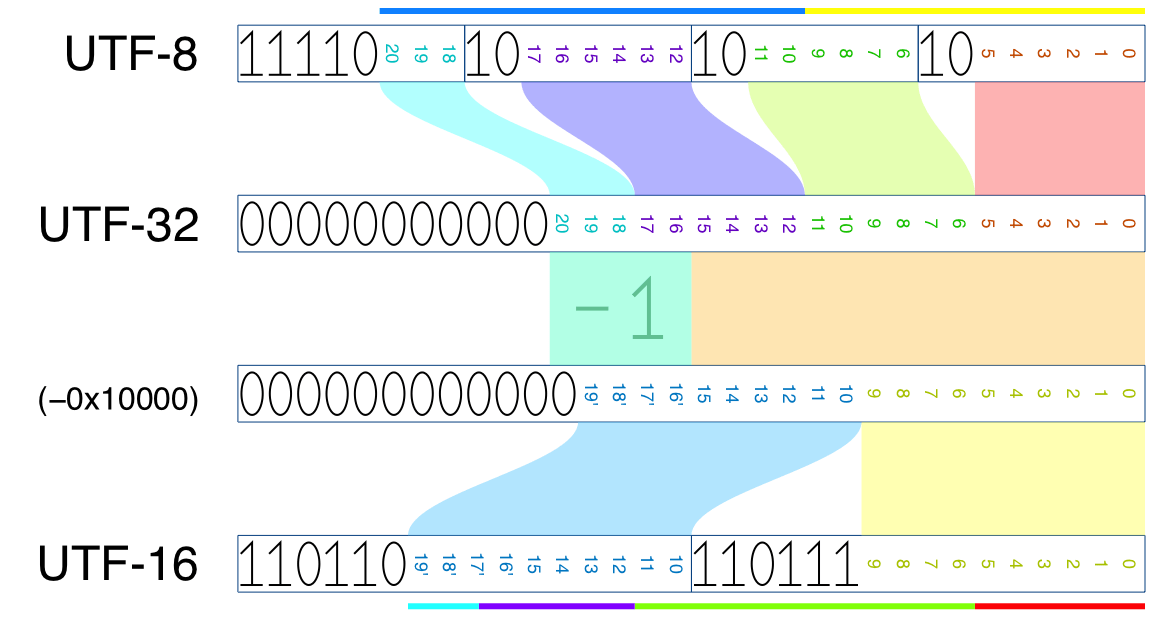 Therefore, we can split a 4-byte sequence f0 9f 98 82 into two overlapping sub-strings f0 9f 98 and 98 82, each of which is sufficient to determine corresponding surrogate code point, and thus able to compare with the proper WTF-8 encoding.

For consistency, we will encode the low surrogate using a 3-byte substring instead of 2-.

The terminology used in OMG-WTF-8 follows those of WTF-8.

A high surrogate is a code point in the range U+D800 to U+DBFF.

A low surrogate is a code point in the range U+DC00 to U+DFFF.

A surrogate is either a high surrogate or a low surrogate, i.e. a code point in the range U+D800 to U+DFFF.

A 3-byte sequence is a sequence of 3 consecutive bytes.

The canonical representation of a surrogate is a 3-byte sequence, generated by encoding the said code point via generalized UTF-8.

The well-formed OMG-WTF-8 sequence consists of, in order:

Canonicalization is a process which converts a 3-byte sequence from split representation to canonical representation. This process can be done in-place.

OMG-WTF-8 must be converted to WTF-8 when stored.

It is possible to slice a well-formed OMG-WTF-8 string s[i..j]. In order to maintain well-formed-ness, the resulting string may be longer than j - i.

The index can point at the middle of a 4-byte sequence, e.g.

Pointing to the middle of a 3-byte sequence is always an error.

Because of the overlapping, it is unsafe to split a mutable OMG-WTF-8 string. We recommend only use OMG-WTF-8 in immutable case, and convert to WTF-8 if mutable access is needed.

An OMG-WTF-8 sequence can be used as a needle for string matching. When matching, transform any unpaired low surrogate at the beginning (no matter in what representation) into a regular expression like this:

and transform any unpaired high surrogate at the end (no matter in what representation) into a regular expression like this:

The WTF-8 sequence in the middle is matched byte-for-byte.

The omgwtf8 package is a demo showing the concept does work. This is not implemented for performance nor feature completeness.