ncspot is a ncurses Spotify client written in Rust using librespot. It is heavily inspired by ncurses MPD clients, such as ncmpc. My motivation was to provide a simple and resource friendly alternative to the official client as well as to support platforms that currently don't have a Spotify client, such as the *BSDs.

Note that ncspot offers features that are legally incompatible with free Spotify accounts. See feature comparison and Spotify user guidelines. You must have an existing premium Spotify subscription to use ncspot. 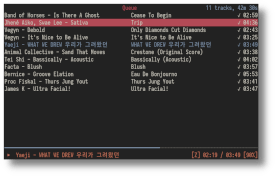 ncspot is available via Homebrew:

ncspot is available via Scoop:

Your distribution may have packaged ncspot in its package repository. If so, simply install using your distribution's package manager - it is by far the easiest way. If not, you can build from source instead. See Build.

In case your package manager does not perform dependency resolution, here are the runtime dependencies:

On Linux, you also need:

For debugging, you can pass a debug log filename:

If ncspot has crashed you can find the latest backtrace at ~/.cache/ncspot/backtrace.log.

Compile and install the latest release with cargo-install:

Or clone and build locally:

You may need to manually set the audio backend on non-Linux OSes. See Audio Backends.

You can also use cargo-deb to build a Debian package

You can find the package under target/debian.

Here are some auxiliary features you may wish to enable:

Consult Cargo.toml for the full list of supported features.

The keybindings listed below are configured by default. Additionally, if you built ncspot with MPRIS support, you may be able to use media keys to control playback depending on your desktop environment settings. Have a look at the configuration section if you want to set custom bindings.

(if built with the share_clipboard feature)

You can open a Vim-style command prompt using :, and close it at any time with Escape.

The following is an abridged list of the more useful commands. For the full list, see source code.

Apart from MPRIS, ncspot will also create a domain socket on UNIX platforms (Linux, macOS, *BSD) at ~/.cache/ncspot/ncspot.sock. Applications or scripts can connect to this socket to send commands or be notified of the currently playing track, i.e. with netcat:

Each time the playback status changes (i.e. after sending the play/playpause command or simply by playing the queue), the current status will be published as a JSON structure.

Possible use cases for this could be:

Configuration is saved to ~/.config/ncspot/config.toml (or %AppData%\ncspot\config.toml on Windows). To reload the configuration during runtime use the reload command.

Keybindings can be configured in [keybindings] section in config.toml.

Each key-value pair specifies one keybinding, where the key is a string in the format of:

Its value is a string that can be parsed as a command. See Vim-Like Commands.

More examples can be found in this pull request.

It's possible to customize how tracks are shown in Queue/Library views and the statusbar, whereas statusbar_format will hold the statusbar formatting and [track_format] the formatting for tracks in list views. If you don't define center for example, the default value will be used. Available options for tracks: %artists, %title, %album, %saved, %duration

ncspot also supports customizing the way notifications are displayed (which appear when compiled with the notify feature and notify = true). The title and body of the notification can be set, with title and body, or the default will be used. The formatting options are the same as those for track formatting (%artists, %title, etc)

When compiled with the cover feature, ncspot can draw the album art of the current track in a dedicated view (:focus cover or F8 by default) using Überzug. For more information on installation and terminal compatibility, consult that repository.

To allow scaling up the album art beyond its native resolution (640x640 for Spotify covers), use the config key cover_max_scale. This is especially useful for HiDPI displays:

ncspot prompts for a Spotify username and password on first launch, uses this to generate an OAuth token, and stores it to disk.

The credentials are stored in ~/.cache/ncspot/librespot/credentials.json (unless the base path has been changed with the --basepath option).

The logout command can be used to remove cached credentials. See Vim-Like Commands.